Pukaha wildlife may suffer as a result

Long-time trapper Chris Pedersen was so sick of seeing numbers of rabbits at “plague levels” around Pukaha National Wildlife Centre, he wrote to Conservation Minister Eugenie Sage to get some action.

Rabbits are a favourite food of ferrets and the more food ferrets have, the more they breed and the more destructive the pest becomes.

In his letter to the minister, he said, “Pukaha has extremely high rabbit populations in and around its boundaries making it a prime breeding ground for ferrets, stoats, weasels and feral cats”.

Pedersen was also concerned that the two-kilometre buffer ring that was supposed to exist around Pukaha was not being monitored or checked for feral cats.

He also wrote to Greater Wellington Regional Council representative Adrienne Staples, who responded acknowledging the problem of high rabbit numbers saying she would “follow it up”.

Pedersen was mainly annoyed that there was what he perceived as a “no-man’s land” where neither the Horizons Regional Council, GWRC, private land owners, or Pukaha contracted trappers to do anything because “no one is taking responsibility for various strips of land”.

The minister responded on August 14 saying that the Department of Conservation had reported an increase in rabbit populations over the past three years.

“An over-abundance of prey animals such as rabbits does serve to increase the number of predators such as ferrets in the landscape,” Sage said.

“As we have seen, this can be devasting for ground dwelling birds such as kiwi. I understand local land-owners have noted that rabbit populations around their own properties are in excess of anything they have experienced in the past.”

Sage said she had been told a working group of landowners, Pukaha staff, HRC, GWRC and DOC was being established.

Pukaha general manager Emily Court confirmed discussions were under way to establish the group, which Pukaha would lead. 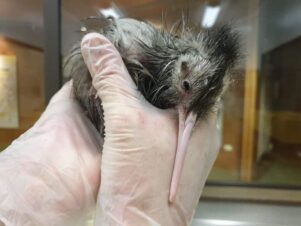 Pukaha head ranger Jess Flamy uplifted a kiwi egg from the reserve last Friday from under Kakama, the male kiwi who looks after it.

The egg was incubated successfully, and a kiwi hatched on Wednesday morning.

It would be released when it had grown to a size and weight of about 1.2kg to give it a greater chance of survival.

The sex of the kiwi was unknown at this stage.