Pukaha for the people In an act of generosity, the iwi of Rangitane o Tamaki-nui-a-Rua and Rangitane o Wairarapa gifted the forests of Pukaha to the people of Aotearoa at a ceremony attended by the Prime Minister on Saturday morning.

The Crown had previously returned Pukaha/Mount Bruce National Wildlife Centre and Scenic Reserve to Rangitane in a Treaty of Waitangi settlement signed in August 2016.

The reserves had a combined area of about 950 hectares – a small section of the great forest known as Te Tapere nui o Whatonga that had once stretched from just north of Masterton to the plains of Takapau, north of Dannevirke. Early settlers to the region had referred to the forest as the 70 Mile Bush.

The settlement land had been vested in the Rangitane Tu Mai Ra Trust.

Trust chair Sonya Rimene spoke at Saturday’s ceremony of the importance of the treaty settlement to rebuilding the iwi.

According to the summary of the deed of settlement, when Europeans had first arrived in the region in the mid-1840s, Rangitane had enjoyed the benefit of the settlers leasing large areas of land.

However, the Crown had then applied pressure on Rangitane to sell their land rather than lease it.

“The settlement in many ways is aimed at restoration and reconciliation for us as a people,” Rimene said. “It has provided a new beginning for us … as a unified people, moving together towards a future that has been informed by our past.” 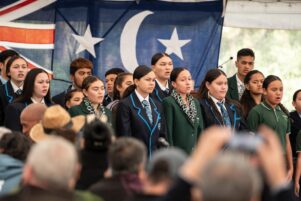 The date chosen for the ceremony – May 1 – would have been the 10th birthday of rare white kiwi Manukura, who was born in captivity in 2011 and raised at Pukaha.

Rangitane had hailed the birth of the kiwi as a blessing.

“We saw her as a unifying symbol, as a signal to help time our future relationship with Pukaha,” Rimene said. “Today her legacy will be marked in our nation’s history as the day that

Rangitane gifts the 943-hectare Pukaha Reserve to the people of Aotearoa, and indeed, to the world.”

“I can barely imagine the hurt associated with losing this taonga and the great joy you must have felt when it was reunited with you formally once again,” Ardern said.

Ardern previously visited Pukaha in 2019 when Rangitane o Wairarapa invited her to name a kiwi that was about to hatch. Ardern chose the name Koha Te Aroha, ‘a gift of love’, in recognition of the generosity of Rangitane.

In February last year, Governor-General Dame Patsy Reddy placed a korowai [cloak] over the shoulders of Rangitane leaders as a symbol of the return of Pukaha to Rangitane.

On Saturday, Ardern received a white korowai decorated with blue feathers as a symbol of Pukaha being gifted to the people of New Zealand. 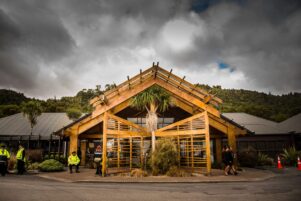 The Crown previously returned Pukaha/Mount Bruce National Wildlife Centre and Scenic Reserve to Rangitane in a Treaty of Waitangi settlement signed in August 2016.

“On behalf of the people of Aotearoa New Zealand, we say thank you,” Ardern said.

It was an especially proud occasion for Rangitane o Wairarapa cultural adviser Mike Kawana, as the korowai had been woven by his sister. His nephew also acted as Ardern’s translator during the ceremony, while his brother acted as her speaker. Kawana served as MC for Saturday’s ceremony.

Kawana thanked everyone involved in the planning and running of the wananga [education centre] being built at Pukaha.

“I want to assure you, whanau, that they won’t stop just because we’re gifting Pukaha to New Zealand today,” Kawana said. “Our wananga will continue.”

Pukaha general manager Emily Court said it was a special day for the centre, marking a strengthening of its partnership with Rangitane.

“I think that we are already on quite a journey at the moment to introduce more cultural practices in everything that we do and represent Rangitane better than ever.”