As farmers across the region cry out for rain, many in the viticulture industry will be hoping it holds off for just a few more weeks. GIANINA SCHWANECKE talks to winegrowers around the region about the upcoming harvest.

Picking has gotten underway across the region, including at Luna Estate in Martinborough.

“We might start picking [the others] at the end of the week or early next week.

“We’re looking really good and I’m really happy with the yield. We’ve just got to get it in now.”

He said there was more fruit this year, as wineries across the region were lucky to avoid the spring frost which damaged vines the year before.

“We were frost affected last year which had an impact on the size of the crop and the speed at which it ripened.”

Operating across two vineyard sites, he said they were likely in for a longer harvest than last year as each matured at a slightly different rate.

“This is going to be a long harvest. We’ll be picking through most of April.

“It’s good because it gives you a bit of a break to catch up in the winery in between.”

Watson hoped the heavy rain would hold off until they had finished with their picking season.

“A little bit of rain is a good thing. What we don’t want is lots of big events. 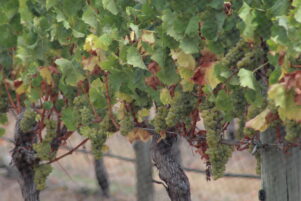 Smaller berries due to a hot, dry summer means more flavour is concentrated in the berries. PHOTO/GIANINA SCHWANECKE

Te Hera Estate, just outside of Martinborough, was one of the vineyards hit hardest by severe frosts last year.

Owner John Douglas estimates they lost up to 70 per cent of their yield to the frost but the vines were recovering.

“Things are looking pretty good for us,” he said.

“We’re recovering from the frost from last year, so our volumes are not high but they’re okay.

Situated a few kilometres outside of the Martinborough township, about six kilometres down Te Muna Rd, he said they were still about two or three weeks off picking.

“The grapes taste fantastic though they’re a couple of weeks off.”

Douglas said he was one of few people in Wairarapa who didn’t want the rain.

“As long as the rains off we’ll be alright.

“Because we’re mostly focused on Pinot Noir and one variety, we don’t have a long harvest period.”

Jannine Rickards, winemaker at Urlar in Gladstone said they had just started picking grapes for their sparkling wines.

“We’ll be looking at the chardonnay over the next few days, but the pinot noir is not quite there for us yet,” she said.

It had been a different season to any others, with heat and strong winds over the summer.

“I think it will be a few weeks before we have a good idea of yield.

“The bunches look tighter and smaller in terms of berry size.”

She wasn’t too concerned about the rain though.

“The little bit of rain we’ve had has been quite helpful in rejuvenating the canopies.” 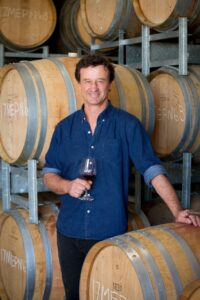 “The yield is better than last year when we were a little bit affected during flower because it was so cold and wet.

“This year, hopefully we’ll have the luxury of a bit more hang time. Next week we’ll be into the main part of harvest.”

“It’s a little cooler too which for the Wairarapa wine style is good with stronger aromatics.

“The pinot noir volume is looking good and the sauvignon is about the same.

The previous two years had produced “awesome vintages”, and he was quietly hopeful this year would be the same.

Dinneen said it was typical for growers to be nervous around this time of year, but a little bit of rain was helpful.

“We’ve needed a bit because it’s been so dry.”

The vineyard contracted out for pickers and started advertising last year.

“We’re quite lucky being based in Masterton,” he said.

“It’s a bit easier to find accommodation and there’s not as much competition from other local wineries.”