Power to the EV people Electric vehicle drivers will be able to recharge in Eketahuna by the Christmas holidays, with a new charging station planned for the town centre. 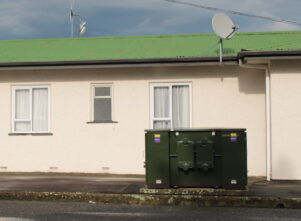 The future site of an electric vehicle charging station in Eketahuna.

The site chosen for the charging station was on Haswell St, opposite Tararua Autos and next to Eketahuna Inn, where Powerco had erected a new transformer.

Two vehicles would be able to use the charging station simultaneously.

Tararua District Council manager of strategy and district development Peter Wimsett had previously outlined the considerations given to selecting an electric vehicle charging station in the town centre.

Wimsett said the charging site needed to be somewhere safe to park near an existing power source. Previous locations considered for the site were behind the Eketahuna Service Centre or in the vicinity of Tararua Autos.

“It will be good for the Eketahuna community to offer that service,” board member Denise Clifton said.

Clifton said some EV owners had charged their vehicles at the campground, which was 1.5km away from of central Eketahuna.

“It will be good to have that in town because it means that unless you’re camping down there, you won’t have to go down to do that. You’ll actually be able to park up in town and have a look around the shops, have a coffee, or take the kids to the playground instead.”

The ChargeNet project was described as “filling a critical gap in the network.”

Currently, an EV driver could fast-charge their car at the iSite in Woodville and then again at Dixon St, Masterton.

Along the way, a driver could access a charger at Pukaha National Wildlife Centre, Mt Bruce. However, with power output of just 7kW, Pukaha’s chargers were described as “trickle” chargers. They would take significantly longer than those planned for the Eketahuna town centre to charge a car fully.

Pukaha worker Marie Weston said while there had been some uptake of the chargers, she expected the usage to increase as new rebates for electric vehicles came into effect.