New outdoor poem displays, which include the work of three primary school children, have gone up around the Masterton town centre and surrounds.

The poems are part of a campaign led by Masterton woman Chris Daniell to get people to love poetry.

“The aim is to make people love words and ideas,” she said.

“The best possible reaction the other day was someone saying they love seeing the poems – it makes you think and smile.” 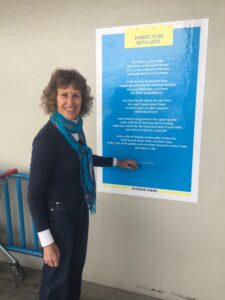 Chris Daniell with Lynley Edmeades’ poem ‘Things to Do with Lists’ on Bannister St.

Daniell started the project last year, putting up 12 poems along walls throughout the central business district.

It’s taken her close to six months to comb through the next 16 poems which went up on Wednesday.

“It’s been fantastic. I want it to be enjoyed by kids and adults.”

She said she was “blown away” by the work of seven-year-old Victor McGrath and his poem ‘Boys Only at the Beach’.

“I was born to be wild – but only until 9pm, then I go and snuggle in my beach bunk,” he wrote.

There’s no set theme and the poems are varied in style and content, as were the materials used to put them up.

The variety of poems helped make them more accessible.

“The poems are about anything. They’re not only academic and profound poems, but also quirky, simple, funny, and challenging poems so that many people’s tastes can be catered for.”

What links the poems is the Wairarapa connections for the people who wrote them, many who either live or have lived in the region at some point.

Even the poem posters are produced locally. They are being designed and printed by Featherston-based Visual Industrie.

“The technical side has been difficult, trying to get the right materials for different walls, whether it’s brick or wood or glass.”

The grassroots nature of the poems is exactly what Daniell wanted for the region – the poems form a trail around the town and help beautify neglected corners.

She’s previously led a women’s biking group on a tour, stopping at each poem and explaining more about its history.

She hopes to run another tour with Wairarapa Word in November.

The first set of poems were self-funded, though this time she had some help through a $2000 arts grant from the Masterton District Council.

Daniell said she was grateful for their support not only in funding but also in placing the poems.

“I’d just really love more people to be proud of having words up on the walls,” she said.

Anyone interested in submitting their own poems or placing one on their property can get in touch with her through chrisdaniellnz@gmail.com