Bringing to life the stuff of fantasy is child’s play for the students of the Jazz Dance and Drama Centre’s Broadway Jazz unit.

The Masterton company’s latest performance was rid of their norm, however – no fairy tale characters or talking animals.

Taking on a show with as serious tones as ‘Oliver! Jr’ tested the skills of both cast and crew, but all rose to the challenge and created an incredible experience.

‘Oliver! Jr’ maintains the story of the original musical.

An orphan named Oliver is really put through the wringer – sold to an undertaker, roped into pickpocketing and kidnapped.

The 60-minute affair is fast-paced and maintains a balance between theatricality and realism, and featured all of the classic numbers; ‘Consider Yourself’ and ‘Food, Glorious Food’, to name a couple.

The story does a wonderful job of captivating the audience while illustrating the grim reality of orphanhood in mid-19th century England.

Things such as coffins and a working lamppost provided enough context, helping the audience understand the narrative while keeping them focused on the action.

Newsboy caps and vests in all shades of beige worked well to reflect the time and made pop the little colour that existed, whether in Dodger’s [Jack Brown] bright pants or Fagin’s [Will Tickner] long green cloak.

The constant singing and extravagant dance numbers created most of the colour, turning a beige town bright. The work of director Sharon Stevens-Cottle kept students on their toes and ensured that there was never a dull moment on stage. 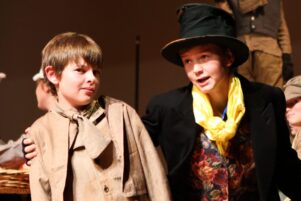 The company pulled it all off despite the difficulty, and a special mention should go out to Oliver [Angus McLearie], who sang through almost every scene.

Performing just after the first term was new territory for the company.

It seems the right move to make, however; with the senior Broadway Jazz class at full capacity, it was time the group received their own stage.

The 64-member cast have worked tirelessly during the last term to perfect choreography and get their lines down. According to Stevens-Cottle, “[the students] lost two weeks of term with the audition process”.

“They’ve had a really short window of time to do this.”

With many students beginning college, or their first year of NCEA, balancing the scripts with schoolwork couldn’t have been easy.

In seeing the energy that they bring to the stage, however, it becomes quickly apparent that ‘they’d do anything’ for theatre.

Performing a show of a more serious nature illuminated new sides to some of the students.

Paige Johns played her role as Nancy immensely well, creating a character with which the audience engaged and empathised with.

‘Oliver! Jr’ was a team effort, as are every JDDC production – in fact, most dance and theatre productions around Wairarapa.

It takes sewers, builders, techies and choreographers to help realise the full potential of any script, many of whom are parents. And, of course, a determined team of performers.

“Everyone should be proud of how quickly it all came together” Stevens-Cottle said.

With an extremely short rehearsal period and an unfamiliar genre, JDDC gave this show a shot and nailed it.

Their audience certainly ‘wants some more’, so the cast and crew should ‘consider themselves’ successful and prepare to wow in future performance.