Cornel de Ronde and Jenny Black of GNS Science with the new plaque that marks the centre of New Zealand’s extended continental shelf which covers an area equivalent to one per cent of the Earth’s surface. The plaque is next to a walking track in the Tararuas near Greytown. PHOTO/GNS

South Wairarapa is now officially the centre of the country with a plaque set in concrete to prove it.

Marking the geographic centre of New Zealand’s extended continental shelf, the plaque is in place in the Tararua Range, 11km northwest of Greytown – adjacent to the Mt Reeves Track. It’s the result of a collaboration involving conceptual artist Billy Apple, GNS Science, and the Department of Conservation.

The move may miff the people of Nelson who have long celebrated the centre of New Zealand on a popular hill walk close to the city.

But the new plaque recognises the fact that since 2008, the United Nations has recognised that New Zealand’s territory includes the undersea continental shelf as well as the land mass above the sea.

New Zealand scientists made a successful submission to the UN for recognition of our extended continental shelf in 2008.

This resulted in an extra 1.6 million sq km of seafloor being added to New Zealand’s exclusive economic zone.

The project was a joint effort by GNS Science, the National Institute of Water and Atmospheric Research, Land Information New Zealand, and the Foreign Affairs and Trade Ministry.

Intrigued by the notion of this large underwater realm, Billy Apple asked the question: “Where is the centre of New Zealand’s extended continental shelf area?”

During the 1970s, this was a conceptual art question he posed to reveal the nature of exhibition spaces.

Auckland-based Apple approached GNS Science about creating an art work based on a large survey pin that would mark the geographic centre of this vast land and marine territory.

GNS Science researcher Jenny Black carried out the calculations that identified the centre as being on DOC land in the Tararua Range. 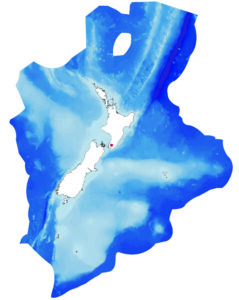 A graphic showing the centre of New Zealand, when the extended continental shelf is taken into account. IMAGE/GNS

DOC helped to install the stainless-steel artwork beside the Mt Reeves Track, which runs close by the centre point.

“We’ve always considered Wairarapa and the Tararua Ranges to be the heart of the country. It’s nice to discover this has geographic truth.

“We hope this encourages more people to get out and explore Wairarapa’s natural spaces.”

GNS Science marine geologist Cornel de Ronde, who along with Apple has been a driving force behind the project, says that the plaque signifies a new way of understanding our place in the world.

“It’s a small but important reminder that our continental land mass does not end at the coastline, but extends out beyond the horizon, with about 95 per cent of New Zealand’s territory lying beneath the sea.”

He hopes the people of Wairarapa embrace the idea.

“I would like to think people think this is pretty cool, and it becomes an iconic spot.”

He says the plaque is close to panoramic views of the Tararuas and the Greytown area.

“I would like to think people will make the climb, stand on the plaque, and appreciate they are at the centre of this vast area that comes under New Zealand sovereignty.”

The underwater territory straddles the boundary between the Pacific and Australian plates and includes submarine volcanoes and a subduction zone that is part of the Pacific Ring of Fire. Because of this, it is potentially the source of large earthquakes and tsunamis.

“We need to explore this underwater frontier so we can better understand the underlying geology of our country and enhance our ability to deal with the natural hazards,” de Ronde said.

The circular stainless-steel art work, which is 1m in diameter, was installed with the aid of a helicopter.

Apple said his focus on art and life meant that his work dealt with real issues.

“The collaboration with Cornel de Ronde and his team at GNS Science has been a great opportunity and keeps art relevant,” he said.

The image on the plaque shows the outline of the main islands that make up New Zealand sitting inside the silhouette of New Zealand’s extended continental shelf boundary. The exact co-ordinates of the geographic centre are inscribed around the plaque: 175° 21.737’E, 41° 1.093S.

Directions for getting there:

Park in the carpark at the end of Waiohine Valley Road, about 10km from Greytown in Wairarapa. Follow the Mt Reeves track on foot for about 6km.

The track is well-marked with orange DOC triangles. A reasonable level of fitness and good footwear are recommended.