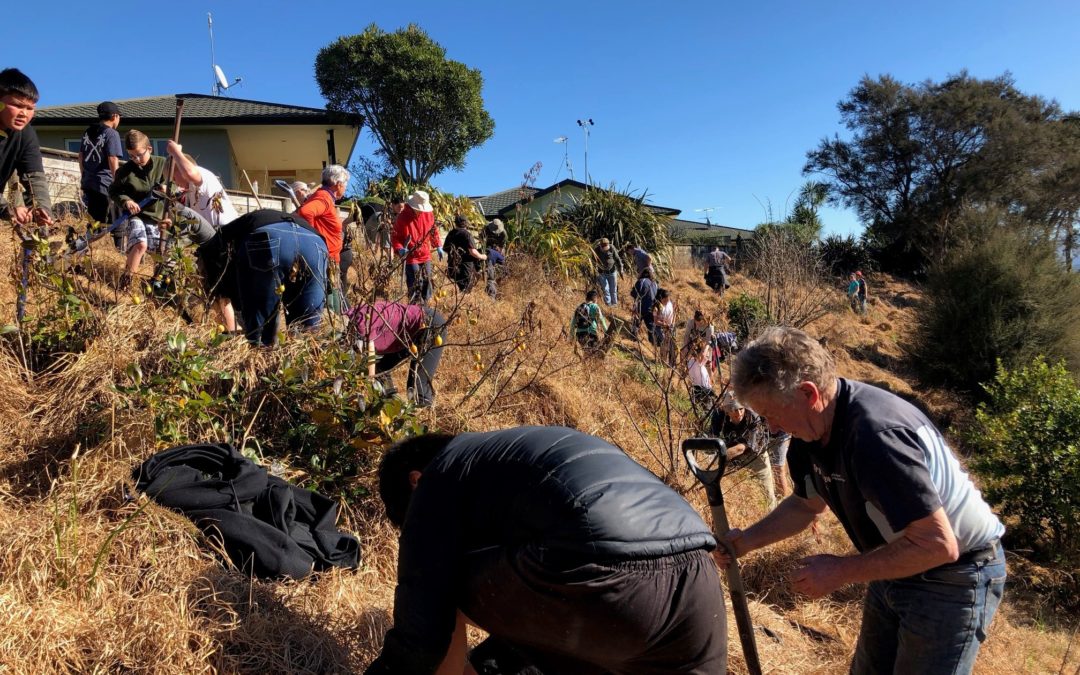 Masterton district councillor Chris Peterson teaches the next generation how to plant. PHOTO/FILE

Thousands of plants have been planted along the Lansdowne recreation trail in Masterton during winter, and some trees will literally bear fruit for walkers in the area.

The Lansdowne Residents Association Inc is behind the massive effort and Masterton District Council [MDC] came up the with plants.

The Department of Conservation and Greater Wellington Regional Council also provided assistance, and labour came from everywhere from the Wairarapa Boxing Academy to Rathkeale College.

There were four well-attended plantings during the winter, association spokesperson Sandy Ryan said.

She said council officers organised the planting of 50 heritage apple, pear and nut trees, in a project with Rathkeale College.

“We planted everything else, which is about 4700 locally-sourced natives,” she said.

The idea is the fruit trees will provide food and shade along the recreation trail from the Fourth Street entrance,
but leave enough space for council workers to access the stream when needed for water and flood management purposes.

The rest of the plantings have been of natives along the other bank of Opaki Stream, and on the hillside below Lansdowne Park Lifestyle Village.

It’s hoped they will bring more birds back to the area.

The association started as a collective, which was essentially a working party, that held regular meetings to develop a neighbourhood plan and feed into the council’s planning processes, including its long-term plan.

By becoming an incorporated society in January, it became a more formal entity which can apply for a wider range of funding.

The first goal was the revitalisation of the commercial centre in First Street. It is also installing book exchanges in streets.

Ryan says the riparian plantings came about because people said they loved the waterways in the area.

The association wants to put in 20,000 plants during the next two to three years.

An area of focus in future will be the lake at the bottom of Milford Downs and wasteland adjacent to it.

“We are going to turn that into a children’s natural exploration playground,” Ryan said.

Bridges would be made from logs and “some amazing old tree stumps” had been donated, which would be a sculptural element, a home for bugs and invertebrates, and something to climb on.

MDC councillor Chris Peterson has been at all the plantings.

“Those young people learned how to plant so the plants will survive, so we had some good learnings going on,” said Ryan.

“Some of these things are a success when you have lots of arms, when you are reaching out to a lot of people,” she said.

In the early days the association produced plans for people to comment on and now it was doing projects in which they could be physically active.

That had added momentum to its work, as volunteers had come from as far away as Eketahuna and Alfredton to help with the winter plantings.