Planting the seeds of a sustainable future Sustainable living is a phrase people either embrace wholeheartedly or completely shy away from. Reporter ELISA VORSTER branches out to learn about what one Carterton resident is doing to show others how to have fun while creating a resilient community.

As someone who regularly describes her garden situation as looking like that of an abandoned house, I’m easily impressed by anyone who has a tidy garden.

The extent of my gardening knowledge stretches as far as having once successfully harvested a vegetable garden, and breaking out in welts on the rare occasion I try to pull weeds.

When 80-year-old Helen Dew told me about her plans for building a garden from scratch to promote sustainable living, I was definitely intrigued.

From the moment I arrived at the house it was all go – her planter boxes were being built there and then by landscaper Richard Ashcroft, and her new kit-set tunnel house was about to be delivered.

We agreed to talk for half an hour, but this only scratched the surface of her wealth of knowledge. Two hours later I felt I still had so much more to learn.

The first 20 minutes had me getting schooled on the community’s green dollar (a mutual credit system) and other local currency systems which she said were a “vital contribution to the economic fabric of a functioning community”.

Then Mrs Dew went on to explain how the simple joy of always eating seasonal produce meant she could celebrate the first strawberry and first tomato of the season.

Whatever she doesn’t produce herself, she buys locally, such as mushrooms, nuts and eggs, and she hates the thought of missing a farmers’ market, as she sees it as an important part of networking in the community.

“I don’t want to be fully self-sufficient,” she says.

“I don’t want to do everything for myself.”

She refuses to use a weed mat, as it’s a carbon product and creates a carbon footprint.

Instead, she is lining the ground with old newspapers soaked in water, and using recycled wool carpet.

“I’m re-utilising something that’s going to waste and that’s helping the carbon footprint as well.” 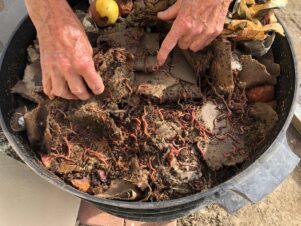 Her food scraps don’t go to waste either – they are used for feeding her worm farm.

It came as little surprise to hear she featured in the movie ‘Living the Change’ – a New Zealand documentary about people doing inspiring things to mitigate the effects of climate change.

As a member of the community group Resilient Carterton, Mrs Dew had previously organised a screening of the film at the Carterton Events Centre for Sustainability Week, and had since regrouped with people who attended the screening to discuss the projects it had inspired.

The projects ranged from installing community gardens, collecting coffee grounds to distribute to gardeners, to enlisting help from an Auckland tutor to construct a rammed earth house.

But for Mrs Dew, the concept of sustainable living started decades ago, living as a vegetarian at her Costley St residence, which had her almost fully sustainable all year round.

“It’s quite demanding to have sufficient supplies but I’ve learnt skills for drying, dehydration, making pickles and jam, and I have a supply of garden vegetables in the freezer.”

Her previous home had an extensive vegetable garden, numerous fruit trees and a water bore.

In fact, the garden was so successful, she hadn’t needed to go near a supermarket for almost three months and even had surplus produce to sell at the farmers’ markets.

However, a few months ago Mrs Dew started to experience health problems.

She was struggling to walk unassisted and thought she was going to have to go into care.

With the right medication, her balance was restored and she became mobile again, but knew a smaller property would put less strain on her.

“I needed to reduce the time and energy the previous property demanded.”

She moved to her two-bedroom property at William Wong Pl, but not before making sure the garden was going to meet her needs.

Starting again from scratch would seem daunting to most people and no one would begrudge Mrs Dew for taking the opportunity to retire in relaxation.

Instead she set about making 12 bins of her own compost and has plans to plant an orchard of fruit trees. She is awaiting the installation of a water bore.

“It puts less demand on the town water supply, especially in times of drought, and gives me access to water whenever I want it.”

She said the bore would also provide her with chemical-free water which would help the micro-organisms in her homemade compost flourish.

I was worried about how to politely ask why she cared about sustainability at this stage in her life, but I was relieved when she chuckled in response.

“It’s for the current population as well as for future generations, but don’t put us in a place of guilt to save the planet for the future.

“Let’s do something that makes us enjoy life now.”

And for her, dreaming big, embracing her creative instinct, and seeing things grow not only makes life fun but helps address the issues of climate change.

I was overwhelmed at the thought of embracing a sustainable way of life which stretched further than putting out my recycling each week, but Mrs Dew said it was much simpler than I thought.

“Start small and connect with people.”

And starting small didn’t exclude having a big idea.

“It started with a submission to Carterton District Council three years ago and things have spun out from there.

“I had a vision of the Events Centre filled with people excited about what they would like to see Carterton become.

“One person can have a big idea and it might go nowhere, but you’ll have fun along the way.

“Carterton has something in the water – it’s a caring community of welcoming people.

“I don’t think you can over-emphasise community connectedness in measuring the well-being of a community.”

She hoped her small garden would inspire others and show them the capacity for food production in a limited space.

“I want this place to be a model to inspire ideas of what people could do in their own properties.”