SWDC: Track closed by its own administrators

More than 1200 motocross riders and supporters have signed an online petition to demand the reopening of the Lake Domain Reserve motocross track, which lies on the banks of Lake Wairarapa near Featherston.

Over Christmas, more than a kilometre of double-width track had been graded for dirt bikes. Complaints were made by other users to South Wairarapa District Council and police.

The council has since issued an abatement notice to the track administrators over any further work.

On Friday, the council said the motocross community responsible for maintaining the trail had closed it “following feedback from a range of groups and individuals … to avoid any potential health and safety incidents and allow for consultation on the future scope and position of the motocross track within the Featherston community”. 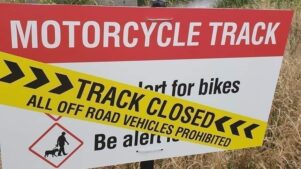 Signs at the Lake Reserve Domain, Featherston, notifying of the closure of the motocross track. PHOTO/SUPPLIED

Gordon Antony of Featherston created the petition on Saturday morning, asking the council to reopen the track, in response to the closure. It had gained more than 1200 signatures by 6pm on Monday.

Antony, 25, said he had been a lifelong user of the track and wanted to teach his family to ride there. He said the track had been available for use by motocross riders for training for decades.

“I’ve talked to a couple of people who have lived in Featherston for 40 or 50 years and it’s been there as long as they can remember.

“We’re very willing to share the reserve with others, walkers, horse riders, whoever. But it’s just not fair one group has been kicked out of the motocross area so walkers and horse riders can use it.”

Antony said he was considering selling his bike as there was nowhere else nearby to take free training rides.

He said he thought the track was the only free public track in the Lower North Island.

Although there is a paid track close by, the next similar course was at Oroua Downs, Horowhenua, a few hours’ drive away.

He said the petition was asking the council to reopen the track, but it did not close it.

“It was closed by the administrators of the track, pending conversations with other people. The only thing the council did was issue an abatement notice from doing any more work.”

Beijen said further discussions and consultations among the councils, iwi, moana groups, motocross representatives, the Featherston community and other reserve users were needed before further work could be done.

“At the moment, through GWRC, they have the right to have a track there. However, the extent of the works required a consent from GWRC, which they didn’t get, because it was quite substantial earthworks.

“The council is being put as being the bad guy when we’re merely trying to control things.

“It’s not going to happen in a week – to come up with a long-term solution, [rather than] a knee-jerk reaction.”