The grant from the Peter Laing Memorial Trust was a helping hand for Gladstone farm owner, Rupert Barton. PHOTO/GIANINA SCHWANECKE

For close to 40 years, Peter Laing served as manager at Castlepoint Station.

During this time, he built a reputation for helping get other young farmers into the industry and develop within the sheep and beef industry.

This year marks 15 years since the Peter Laing Memorial Trust was set up, a year after he died aged 74, to continue his legacy of helping those entering farming. 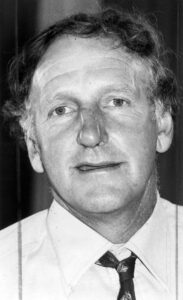 Owing to generous donations given, the trust offers annual grants to assist people obtain practical training for entry into the agricultural industry, whether through a cadet scheme or at the certificate and diploma levels of study.

It can also be used for those starting their first farm job requiring dogs or specialist equipment like a saddle.

Trust chair John Dalziell worked under Laing at Castlepoint as a cadet for many years.

A former councillor himself, Dalziell said Laing was highly respected for his contribution to the Castlepoint community and his service as a councillor.

“Peter Laing’s story is a great story – he was a great guy.

“He brought the station from a block of gorse to a very highly productive farm in the 36 years he managed it.”

Dalziell said the Masterton District Council continued to handle the administrative side of the work and the trust had given grants to 54 aspiring young farmers.

For Gladstone farmer Rupert Barton, receiving a grant from the Peter Laing Memorial Trust in 2009 was the first step towards owning his own farm.

Raised on a sheep and beef farm near Greytown, Barton didn’t realise how passionate he was about farming until his last year of school.

“Dad is extremely passionate. I always enjoyed farm work, but I didn’t know it was what I wanted to do at first.”

After finishing school, he was one of five boys selected to start at Waipaoa Station in Gisborne – the training farm’s first intake of cadets.

They were taught a range of skills including fencing, crutching, tractor driving, chain sawing, and stock management among others.

He then went to Lincoln University in Canterbury, completing a diploma in agriculture and diploma in farm management after two years.

The grant helped cover these costs and allowed him to amass savings in his early shepherding years for a deposit on the 650-hectare [600-hectare effective] sheep and beef property where he has lived for the past three years.

“It’s been incredible that we can farm here on our own.”

Sitting in the kitchen of his home at Ngaringa Station, he said he was grateful for the grant.

“I probably didn’t appreciate it as much back then.

“It’s pretty amazing the trust was set up.”

One of the biggest barriers for many entering the industry was a good team of dogs.

“The better your dogs are, the quicker you climb the ladder,” Barton said.

But it’s also more than that – learning to train his own dogs helped increase his interest in farming.

“I absolutely loved dogs and grew a real passion for working with them.

“I think dogs are a really fun and important way of becoming more engaged [with farming].”

He said the hardest part of farming was getting started and learning what to do, but those from non-rural backgrounds needn’t be afraid either.

“It’s actually a really exciting industry to be a part of.

His advice to those entering the industry was to go in with an open mind and work hard.

“It’s all about attitude,” he said.

He said not to be put off by the pay in those early days.

“You have a house, meat, maybe electricity, and you don’t live close to town, so you are not spending all your money.”

Barton hopes to grow his own farming operation so that they could take on a young worker of their own. For Bridey Kiernan, one of last year’s grant recipients, farm ownership is still a way away but she’s enjoying her time working out at Homewood Station, a coastal property east of Masterton.

Growing up in Castlepoint, Kiernan said she knew of Laing’s reputation and service to the local community.

“My family farm is in Castlepoint, so I knew quite a lot about the trust,” she said.

After graduating from Wairarapa College, she applied for the grant and was one of six selected.

This money had gone towards covering the costs of getting a dog and paying for wet weather gear.

“It’s giving you a helping hand to start your career. There’s a bit of cost involved in terms of getting stuff together.

“The main expenses are dogs.”

She recommended people apply for the grant to help cover the cost of starting their first job.

“I don’t know if a huge amount of people know about it but it’s definitely worth doing it.

She also said it was important for applicants to put the time into making their application stand out.

“It’s about loving what you’re doing and being motivated,” she said.

Criteria for the grants are:

Any queries about the Peter Laing Memorial Trust Grants can be directed to sandras@mstn.govt.nz. Applications close at 4pm on November 1.