A possible future for Wairarapa performing arts was revealed in a public meeting on Sunday. PHOTO/ MARY ARGUE

‘Imagination’ is the limit

Masterton Theatre Company’s [MTC] vision for transforming the town into the envy of the performing arts scene is now public.

Revealed at a public meeting on Sunday, the Masterton Performing Arts Hub, Whare Tapere o Whakaoriori, was billed as a performance space “for the community, by the community”.

The proposal came as Masterton District Council considered the next steps for its civic facility project, which also included a 500-seat theatre space.

MTC and Masterton District Council had both previously stated that a performance centre should complement rather than conflict with the civic facility project.

MTC vice-president Paul Percy and University of Auckland professor Dorita Hannah unveiled the ambitious concept plan to about 40 people at the MTC theatre on Ngaumutawa Rd.

Percy said the project arose from the amalgamation of Masterton’s two theatre companies in 2019.

“We found we had two ageing theatres getting close to their use-by-date.”

He said discussions with MTLT led to funding for a concept plan on the Dixon St site.

Hannah, an expert in performance architecture, led Sunday’s half-hour presentation outlining a facility she said was a “critical project” for the region.

“There is a great dearth of performing arts facilities in the town and region,” Hannah said.

She said the facility would not necessarily solve everything, but it would go a long way to catering for both present and future generations.

Hannah said the building design drew on the historic wetlands of the region and a desire to sit the complex in the landscape.

She said the Harlequin site was “perfect” for productions near the YMCA, UCOL, and colleges.

While the concept would be attractive to touring productions, “education and community” were the priority. 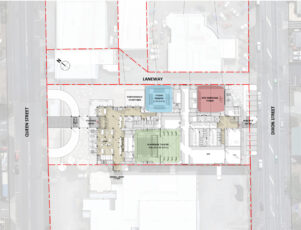 An area on the Dixon St side was carved out specifically for MTC’s use.

Hannah said the pit and bleacher design for the theatres was both cost-effective and flexible and demonstrated combinations from a conventional theatre round to a cabaret-style set-up and a catwalk stage.

“The combinations are only limited by imagination,” she said.

Build cost and car parking space were the most contentious issues when the floor opened to questions.

Percy did not want to commit to a figure before the quantity surveyor’s report, due this week, but said the price would be “up there”.

“It will be substantial, and it will be up to the community to support it,” he said.

Masterton district councillor Gary Caffell congratulated MTC for having decided on a location in a dig at the Masterton District Council’s civic facility project, which did not have a site confirmed.

Councillor Tim Nelson said the lack of car parks in the plan was unlikely to present a problem, citing the Carterton Event Centre as an example.

Percy said the project was out for consultation.

He said that developing a business plan and convincing funding groups to invest was the next phase.

“We need to have a very tough discussion about who we are and what it is that we want.

“It’s up to us [MTC] to prove it will work. The buck stops with us to sell it to our stakeholders.”

Percy said Masterton’s population was projected to increase to about 50,000 people by 2050, and while comparable towns had “magnificent facilities”, Masterton had none.

“Not to get dramatic about it, but I really believe we have one chance to do this.