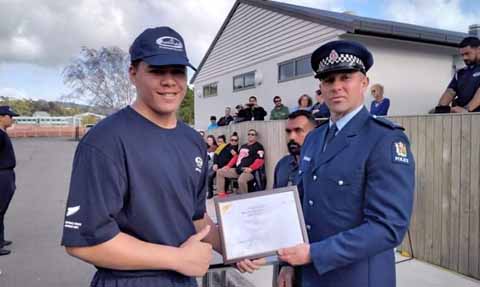 A Masterton teenager came away from an Upper Hutt military camp with a top award to recognise his exceptional achievement.

Kairome No’otai, 15, was selected from a pool of young people from across New Zealand to win the Peers Choice Award at the Blue Light Life Skills programme held at Trentham Military Camp from April 12-16.

The Blue Light programme used largely adventure-based experiential learning to teach 14–17-year-olds critical life skills such as self-development, self-control, and teamwork. It had been run in partnership with the New Zealand Defence Force for the past 11 years.

Programme support person Tracey Newland said the Peers Choice Award was chosen by all attendees on the course, as well as Blue Light and Defence Force staff.

“It’s a reflection of the work that the youth has put into the camp and has demonstrated through the week-long Life Skills camp,” Newland said.

Newland said No’otai had shown his ability to grow and develop during the camp.

“For a lot of these youths, it is a big step up … He’s excelled in all ways.”

Respect was an important attribute of any winner of the award, especially considering the military context of the camp.

“The staff felt that he was always respectful to them and his fellow course members. They’re someone that you’d love to have on your team.”

Some were already interested in careers in the police or armed forces, while others had been referred to the camp to help them find a direction in life and to create employment opportunities.

“The whole environment is based on military camps… It’s got a really strong sense of routine and structure around what their expectations are. That fosters a great learning and development environment for a lot of these youths.”

Recreational activities such as running and swimming helped to bring the young people together while also challenging them to maintain their health.

The camp also focused on life skills, from making a bed and ironing clothes to creating a CV. All skills taught at the camp aimed to empower them to make positive contributions to their community and reach their full potential.