Park lake kicking up a stink Queen Elizabeth Park’s Lake of Remembrance is being choked by weeds. PHOTOS/MARY ARGUE

Smelly lake leaves a lot to be desired

The Lake of Remembrance was once a summer playground for swimmers and boaters, but now residents fear it will be remembered as an unpleasant smelling rubbish dump.

Paddleboat rental company owner Peter Douglas has spent the past seven years tending to visitors who make a beeline for the lake in Queen Elizabeth Park.

Lately however, he had become increasingly concerned about the deteriorated state of the lake.

Douglas said the lake had become choked with weed and litter, and the lack of council maintenance was to blame. 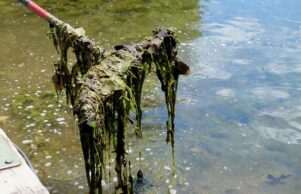 Douglas said the weed stunk and was a health hazard.

“This is the worst I have ever seen it. It stinks,” he said, holding up a rake-full of weed on Wednesday.

“Is that not a health hazard, or what?”

Douglas said he was spending two hours every morning clearing the weed from the launch ramp, and that afternoon had dedicated an hour to untangling weed from the pedal of a boat.

He said the weed would decay and sink, and estimated half a metre of the decomposed matter was lying on the bottom.

Douglas said a meeting with Masterton District Council [MDC] last month about the problem did not amount to much.

“The last time they cleaned it out [Lake of Remembrance] was 21 years ago.

“I just want to know what they’re going to do about it,” Douglas said.

“The water level has become very small indeed, perhaps 300-400ml. Add in the growing weed problem, and it just gets worse,” he said.

Dick said the water level dropped last week to an unusable point for the boats.

“It took council four days to work out the pump wasn’t working.”

He said the lake, built in 1908, used to be gravity-fed by the Waipoua River and was cleaned annually by the council.

Dick said installing a drain on Chapel St, the fallible pump, and significant leaking all contributed to the low water level.

Dick, who attended the meeting with councillors, said it was an opening discussion for ideas, “but so far no one has had any.”

“If anyone has ideas on what to do with the future of the lake, they’re welcome to express them.

“Friends of the Park believe we need a solution.

“The public needs to hear about the issue. It’s going to get worse before it gets better and we need to do something now,” Dick said.

MDC manager of community facilities and activities at Corin Haines said the lake weed was part of the biodiversity of the lake and the water diverted from the Waipoua River was under consent from Greater Wellington Regional Council.

He said last week’s pump breakdown was the fault of an alarm failure and was being investigated.

Haines said the council was developing a plan for “how we manage the lake under consent rules with the changing climate”.

He said such a plan would normally take 12-24 months and include public consultation.