It’s Open Week at Playcentre Aotearoa, where interested families can drop into their local branch and experience the chaos and fun of early learning in a parent-led environment.

Bridie Allen, president of Carterton Playcentre, said although this week had a special focus, every week was open week for the family-centred organisation.

“Playcentre Open Week is a national campaign to help the organisation grow.

“Our doors are always open for visitors,” she said.

Playcentre Aotearoa has 400 centres based in communities across New Zealand.

About 30 children attend in Carterton.

There are also groups in Martinborough and Masterton.

“It’s a great opportunity to visit, but if you can’t visit this week, come next week or the week after because we’re always welcoming new families,” she said.

The theme of this year’s focus week is to share stories, and Allen generously shared her own.

She has three children, one-year-old Sienna, who has Down’s Syndrome, three-year-old Bradley, and eight-year-old Ryan.

The two younger children go to Playcentre, and Ryan goes to school.

The family came back to New Zealand three years ago after four years offshore.

She said Playcentre provided an important community-centred focus for her and the young family.

“We don’t have any family nearby,” she said.

“It’s a long day at home with the kids.

“I had a good friend who was at Playcentre, so I went along. 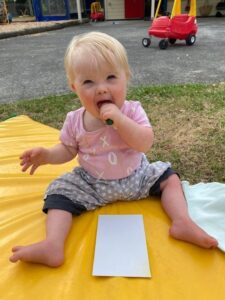 “What’s unique about Playcentre is it’s an early childhood education centre, and parents or caregivers get to stay with their kids.”

She said parents and caregivers didn’t have to choose between sending their children to school or keeping them at home.

“It’s parent-led. It’s a parent co-op. It’s unique internationally. There’s no other organisation like it.”

There are regular set sessions every week, managed by the parents.

“I get to be with my children on their early childhood education journey,” she said.

Allen referenced the work of psychologist Nathan Wallace who said the first 1000 days of a child’s life are arguably the most important developmental stage in reaching full potential.

She said research found children developed best when a parent or primary caregiver was with them during the crucial first three years.

“Children that go to playcentres get all the benefits of going to an early childhood centre, like messy play, paint, interaction with other children, developing relationships, exploring their environment.

“All those things that happen in a kindy or a daycare or a recognised early childhood centre, and we get to stay with our kid while they do it.

Allen said she had also found a supportive community at the centre.

“I’m not alone on my journey with my children.

“Playcentre is where I found an extended family for me and my children because we don’t have family here.

“That’s really powerful as a parent that we get support as well as our children getting what they need.”

People wanting to visit can check open times on the group’s Facebook pages. Carterton is open Monday, Tuesday and Thursdays from 9am to noon.

Allen advised visitors to bring a change of clothes and morning tea and arrive early in the session.