Wild weather across Wairarapa closed roads and bridges, caused slips and partially cut off a major hub on Monday.

There was damage and disruption across the region, with southern areas appearing to bear the brunt of the bad weather. 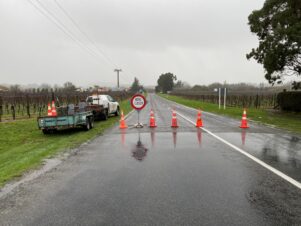 Martinborough was at risk of being cut off throughout most of Monday.

A heavy rain warning was in place throughout the day and main roads into the town were closed as rivers rose and driving rain and gusty winds caused havoc.

The Waihenga Bridge over SH53 between Featherston and Martinborough was closed early Monday morning, with the Ponatahi Bridge closing shortly after 9am. Ponatahi Bridge was expected to open after debris was cleared away, with a stop/go in place for the rest of the day, depending on the weather.

The only open route into Martinborough was Hinakura Rd through Longbush.

The centre of the small town was eerily quiet during the morning as delivery and other vehicles were unable to get in or were delayed by the deluge, although there was little evidence of surface flooding around central Martinborough.

South Wairarapa Mayor Alex Beijen said the overnight rainfall appeared to be flowing through well, with rural roads being watched closely. He said locals were used to similar weather events.

“We are lucky we haven’t seen this in a few years. The council has financial reserves to cope with situations like this.”

Beijen said the council had teams clearing debris from the road to Ngawi and on White Rock road near Tuturumuri. “Trucks are coming through the Ponatahi Rd intermittently.”

He said authorities were also keeping a close eye on river levels, especially in the east of the district, including Tauherenikau.

Conor Kershaw of Pain and Kershaw Four Square said most deliveries were getting through.

“It is frustrating. It’s also stressful for employees who can’t get in or who are worried about getting home.”

More than 60 per cent of Kershaw’s staff live outside Martinborough.

“It would be great to have a bridge that remained open during a flood,” he said.

Surface flooding was reported in Featherston and Carterton, with police saying there had been flooding across Dalefield Rd in Carterton about 7.30pm on Sunday.

“There were three small slips on State Highway 2 on the Remutaka Hill about 3.15pm on Sunday,” a spokesperson said.

One of the slips had partially blocked a lane, but was later cleared by contractors.

A Masterton District Council spokesperson said there had been some damage outside town, but the centre itself had not been badly affected.

The only road that is closed was the Tinui Valley Rd, 10.5km from the Castlepoint Rd, at Orere.

The approach to the bridge over the Tinui River had been washed out, but was expected to be repaired within a day. There were several additional minor slips and trees down across Masterton.

A spokesperson for Carterton District Council said Kaiwhata Rd was closed at Stansborough due to flooding and was expected to remain closed all day Monday.

“There is a slip about 10k up Admiral Hill Rd. We advise people to drive with caution while we work to clear it,” they said.

Metservice meteorologist Thapi Makgabutlane said the heavy rain across the region was primarily caused by a low-pressure system affecting the eastern North Island.

“Some places in mountainous areas have had over 120mm of rain since Sunday morning,” he said.

Masterton recorded rainfall of more than 46mm from Sunday morning to midday Monday.

Rain was expected to start ease overnight, with showers continuing to affect the area yesterday.

“Strong winds will also affect Wairarapa for the next 24 hours, with possible severe gales and gusts of 110kmh expected in exposed areas until this afternoon.”

A Waka Kotahi New Zealand Transport Agency spokeswoman said on Monday that SH53 would remain closed until the river level dropped below 4.5 metres at the Waihenga Bridge.

“As of now, the most recent update from the contractor on-site was the situation remains unchanged,” she said.