Greytown farmers Frank van Steensel and Josje Neerincx in one of their greenhouses, abundant with produce.PHOTO/FILE

New Zealand’s national Organic Week, held from April 29 to May 5 this year, is the country’s largest celebration of organic producers who do not use of chemical fertilisers, pesticides, or other artificial chemicals. Ahead of several events planned in Wairarapa, GIANINA SCHWANECKE talks to some of the region’s organic growers about why they chose to farm this way and some of the challenges they’ve encountered.

For Greytown couple Josje Neerincx and Frank van Steensel, choosing to establish the Wairarapa Eco Farm as an organic food forest was a no brainer.

Originally both from the Netherlands, the two met at university and in 1996 they bought the bare eight-hectare paddock near Tauherenikau with the intention to create the Wairarapa Eco Farm.

“While we were [at university] we were taught about the green revolution or the chemical revolution as I see it. It wasn’t something that sat right with us.

She says they wouldn’t have been able to do it any other way, and views organic growing as equally important for human health as it is the environments.

“You have to build up the immunity and strength of the soil, just like with our bodies.

Josje said it had been challenging at times, farming as an organic producer when surrounded by many who looked down on the practice.

“It has been challenging. It’s only since the last couple of years that conventional farmers have been looking at us as an example.”

She said she hoped the open day at the farm and their presentation at Organic Week events organised in Featherston would help inspire people to consider going organic.

“We are looking forward to people seeing what we do.”

The couple have just pulled out their summer crops in preparation for their winter plantings of kale, chicory and other tasty greens, which help feed up to 120 households — 150 in summer —  signed on to their Community Supported Agriculture [CSA] programme.

Members pay a one-off joining fee and then a subscription in exchange for a weekly fresh food parcel straight from Josje and Frank’s garden.

This is the first year that all the food has been sourced only from their Tauherenikau plot.

It also saw the introduction of a successful 10-week internship programme.

“We will never be finished. There are always projects and it’s always growing,” she laughs.

Places on the organic Eco Farm visit can be booked by direct messaging Josje on their Facebook page, facebook.com/wairarapaecofarms/ 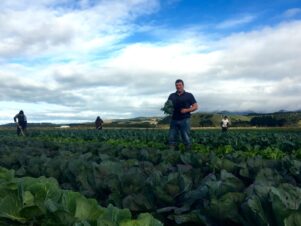 On Cameron Family Farms, it’s a case of go big or go home.

Farm operations manager, John Southey, has been with them since they started the transition process in 2012 through to becoming organically certified and establishing the food forest.

“It’s something they’re extremely passionate about,” he says.

“It’s not a new thing — it’s something which was done by our forefathers.

“Historically organic growers in the 1970s and 80s were seen as a bit weird.

“The current generation is more aware.”

He agrees with Josje and Frank that it comes down to soil quality, something he thinks many farmers are becoming more aware of.

“Organic farming is all about soil health.”

“We feel the pesticides and herbicides that are used on the land are not sustainable.

“Farmers in general are also more aware. Most people have been really good to us down here and we haven’t had any problems.”

The farm business comprises of cropping and vegetable growing, helping to supply the Cameron’s plant-based café and food store in Greytown — Food Forest Organics — and a market depot in Featherston.

Producing organic food at an affordable price is something Southey is proud of.

“There’s a lot of enjoyment and pride you get out of growing produce to eat.”

Southey hopes to educate more people during Organic Week about the processes used in their farming operation.

He says there will be lesson even small scale growers can take back into their gardens.

“We think it’s the way of the future — it’s really the way forward.” Urlar, a Gaelic word meaning ‘the Earth’, is one of Wairarapa’s best known organic vineyards.

The Gladstone vineyard was established in 2004 by Angus and Davina Thomson, originally from Scotland, with organic and biodynamic principles as the heart of their business.

The 40-hectare property is planted in a variety of grapes, including sauvignon blanc, pinot noir, pinot gris and a few Riesling vines.

Urlar was recently sold to a Japanese sake brewing company owned by the Nishi family; however, organic production remains a key part of the business.

“I think it’s better for the eco system. It’s just a healthier environment.”

It’s only her second season at Urlar, but she says it has already had a big impact on her own lifestyle.

Rickards now tries to buy as much locally and organically produce food as possible.

“It’s been an evolution. This really is a lifestyle,” she says.

She says while many vineyards grow organically certified grapes, not many also produced certified organic wines.

They are better quality wines though she says.

“My favourite wines from a recent road show testing were organic. They have a bit more interest and texture.”

With harvest season coming to a close, this is normally a time of reflection for those at the winery.

Rickards said they weren’t planning on doing anything in particular for Organic Week as they normally celebrate NZ Organic Wine Week instead, but she was supportive of those involved.