Knowing that milk comes from a farm where green grass grows in the fresh air, rather than from a supermarket fridge, is important to the shareholders of Kaiwaiwai Dairies Ltd in South Wairarapa.

And shareholder Aidan Bichan hopes opening the farm gates this weekend will offer perspective for those keen to learn more about the dairy industry.

The award-winning Kaiwaiwai Dairies farm has been a leading light in environmental practices in recent years, and shareholder Bichan hopes everyone registered to attend will leave the farm having learnt something new.

The Featherston farm is one of 17 nationwide, and the only one in greater Wellington, opening its gates to the public as part of Fonterra’s Open Gates day on Sunday. 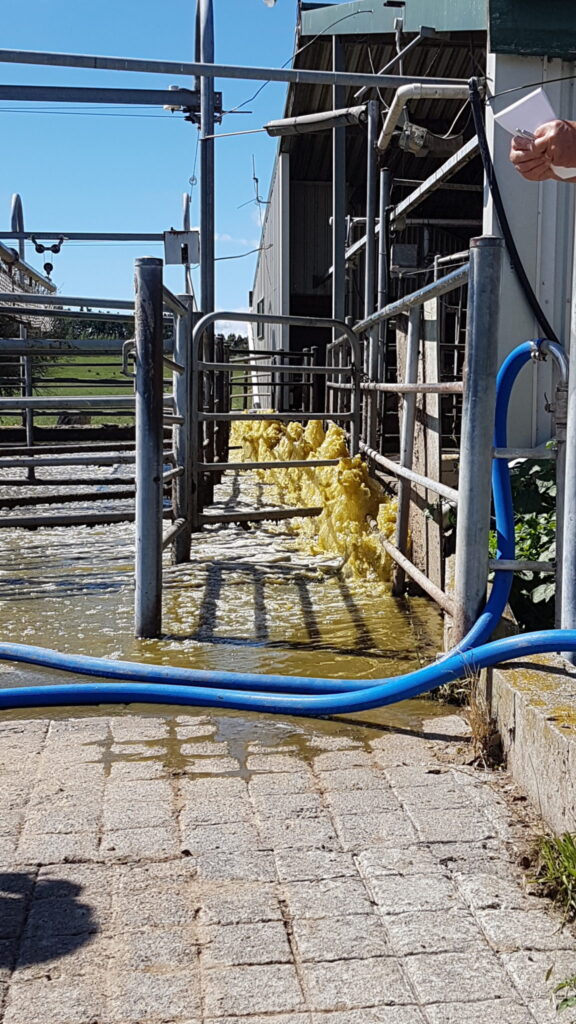 Recycled water being released to flood down the yard, leaving it clean.

The farm participated last year, and hosted about 240 visitors, but this weekend will be a different story.

Bichan said they will need to get in more portaloos as about 900 people have registered for the farm day, with a large number coming from Wellington city.

The shareholders hold the view that their story needs to be told, and “we want to be role models”, Bichan said.

The dairy industry had been taking a hit for quite some time when it came to perspectives on what dairying did to the environment, he said.

They want to “balance some of the views” and show what positive moves are being made for the benefit of the environment.

“It’s the ability to have those conversations, that’s why we want to get our story out directly to the public,” Bichan said.

The farm is owned by six shareholders including Neville Fisher, Vern Brassel and Aidan.

It runs 900 cows that are milked on a split-calving calendar, meaning they can supply fresh milk all year round.

About seven years ago, they set a target to reduce the amount of clean water used in the dairy shed.

This recycled water is used several times before being irrigated to pasture.

On average, each dairy farm uses 70 litres of clean water per cow in the dairy shed, we have reduced this to 36 litres per cow. In November 2015, the farm won a Morgan Foundation award for its boggy paddock converted into wetlands.

The team has been involved in a large-scale wetland project to reduce nitrate leaching into Wairarapa Moana, the largest wetland in the Southern North Island.

As a result, the wetland removes around 690kg of nitrogen each year, making a big difference to nearby Lake Wairarapa.

Bichan said there will be industry representatives, and some of the shareholders there on the day prepared to discuss the issues.

“We will be there to have a conversation about anything – bobby claves, palm kernel, irrigation . . . and even roundup.

“People really appreciate that we were prepared to be open and discuss it and that’s the approach we have taken.”

The open day will offer the opportunity to watch and get involved in milking and calf feeding, and learn about water management, the wetlands and farm efficiency.

A milk tanker and a driver will discuss the hauling process and milk pick up.

Ngati Kahungunu Ki Wairarapa representative Ra Smith will be sharing stories about the history of Wairarapa Moana and Lake Wairarapa.

The Greater Wellington Regional Council will be on hand to discuss the importance of catchment groups in the cities, as well as a dung beetle release.

Kahutara School will be cooking the barbeque.

Bichan hoped his neighbour, and Fonterra board chair John Monaghan would attend the open day.

Registrations for the open day are closed.