All regions of New Zealand, including Wairarapa, moved to the red covid-19 traffic light setting on Sunday night as omicron transmission was detected in the community.

Prime Minister Jacinda Ardern announced the move on Sunday morning after nine cases in Nelson were confirmed to have the omicron variant.

The cases were first identified on Saturday and were all part of the same family. The Ministry of Health [MOH] said they had a clear link to the border.

Arden said omicron was now circulating in Auckland and possibly the Nelson-Marlborough region, if not elsewhere.

MOH did not report any new cases of covid-19 in Wairarapa on Sunday, leaving the total at five cases isolating in South Wairarapa.

There were no new locations of interest in Wairarapa.

Ardern said even if an area of the nation did not have omicron in the community, the variant moved quickly.

She said the red traffic light setting was not a lockdown, but people should prepare to be in red for some weeks.

Wairarapa MP Kieran McAnulty said New Zealand only had to look overseas to see what could happen when omicron spread within the community, causing high levels of hospitalisation and death, as well as a significant impact on economies.

He said the move to red was the right decision.

“It enables us to be in the best position possible to prevent spread and preserve lives and livelihoods.”

He said Wairarapa was “incredibly well placed” to deal with omicron outbreaks.

“The DHB has a plan in place, and on the whole, there is a high level of compliance regarding health measures and guidelines.”

McAnulty said there had been cases in the region before, and people had done what they needed to do to get through it.

“I am very confident we can keep transmission to a minimum.” Wairarapa remained quiet without large supermarket queues as the nation moved to red.

He urged people to stay vigilant and support businesses as much as possible.

South Wairarapa Mayor Alex Beijen said that with cases in the community, people needed to keep an eye out for each other.

He said there needed to be more public conscientiousness with wearing masks and scanning in.

Beijen said the government was reacting to omicron with a move to red because of the healthcare system’s lack of ability to cope.

Beijen said the number of cases that South Wairarapa ended up with would be proportional, and the district would likely fare better than big cities.

He said one of the most significant immediate impacts would be the cancellation of events.

Carterton Mayor Greg Lang said an outbreak of omicron was inevitable, and it was the next part of getting through the covid-19 pandemic.

He said the nation had prepared as much as it could. 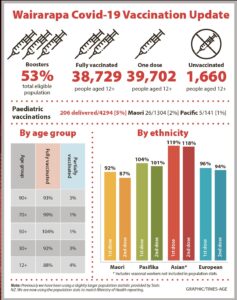 “As omicron enters the community, support those who have been infected. Every street in Carterton has a good network of people looking out for each other.”

Masterton Mayor Lyn Patterson said that now was the time to make a household covid-19 plan.

She said cafes needed to start following rules about vaccine passes and masks, especially now the nation had moved to the red setting.

Ardern said schools would remain open, with mask-wearing for everyone from Year 4 upwards.

She said the red-light setting had restrictions, but businesses were still open. Venues were limited to a maximum of 100 patrons.

“We know we will see far more cases than we have in the two years to date, but the difference to previous outbreaks is we are vaccinated, and we are better prepared.”

Ardern said the government had been preparing for three stages in its response to omicron.

Phase one would occur when there were 1000 or fewer covid-19 cases each day.

She said that this first phase was expected to take up to 14 days to begin and involved a “stamping-out approach”.

The next phase was a “transition stage” where the system adjusted to identify people at greater risk of catching omicron and focused on protecting those who were the most at risk of severe illness.

Ardern said New Zealand was not likely to enter stage three for a few weeks. Stage three would bring changes to the contact tracing system.

She said the definition of contacts and isolation requirements would change. More details on this change were set to be announced on Wednesday.

Just days before the announcement of the move to red light settings, Masterton District Council [MDC] announced the cancellation of Waifest, calling the event “unfeasible” in the covid-19 environment.

MDC community facilities and activities manager Corin Haines said the logistics of holding an event that required vaccine passes, combined with the potential move to red, prompted the decision.

He said under orange, a fenced venue would have been required, away from the usual Queen Elizabeth Park site, which would have led to significantly increased costs.

“This was an extremely difficult decision to make, but the logistics and associated costs of running the event at a different venue made it untenable – particularly in light of the risk posed by the omicron variant,” he said.

Haines said the council was looking at options for a community event later in the year.

Cruise Martinborough announced on its Facebook page that its event this year had been cancelled.

It said it might look for another date to hold the event, but it was cancelled for now.

“All entries will be held in credit for January 2023. If this date doesn’t suit, your credit is held for any future date you choose to attend.”

Lang said he felt for event organisers who had “put everything on the line”.

He said they put in a tremendous amount of work to benefit others and encouraged them to look at the bigger picture rather than feeling discouraged.

Ardern said with red light settings, hospitality venues could now only have 100 vaccinated patrons at once, and they must be seated. Don Luciano owner Marvin Guerrero said there would not be much change for his business at the red setting.

However, Masterton’s Don Luciano cafe owner Marvin Guerrero said that there would not be many, if any, changes to how his business operated under red.

He said his business was already seating people, requiring masks and social distancing.

Where can I get a test or a vaccination?

People wanting to get vaccinated or a booster shot can visit:

Walk-in appointments are available for people older than 12.

Appointments necessary for those between five and 11 years.

Every day from 9.30am-5.00pm. Walk-in appointments are available.

Only for those over 12 years old. Walk-ins welcome. Open Tuesday and Saturday, 10am-3.30pm.

People wanting to be tested can visit:

Wairarapa After Hours. Phone before visiting the clinic.

Additional swabbing slots will be made available for the afternoon should there be an increase in demand.

All Wairarapa medical centres are open for covid-19 testing. Please phone before visiting the clinic.

Children under 12 years old should be tested at Masterton Medical or Whaiora in Masterton.