He also gained a commended award in the residential alterations and additions category for Stewart Renovation in Seatoun.

Horse and Cart House is in a Greytown heritage zone and a subdivision of an historic mayor’s cottage.

It is near to the old Cobblestone coach stables. The judges said they appreciated the adoption of equestrian elements to the design. Judges commented the design was a clever response to the complex issue of how to build a contemporary dwelling on a heritage site with a modest budget. 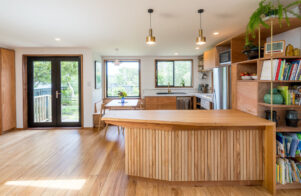 The renovation of a home in Card Cres, Featherston, by Tim Wernham-Doo of Constructive Architecture Ltd won the regional residential alterations and addition award and the residential interiors award.

The house was described as “a rabbit warren of cold and dimly-lit spaces”.

The renovation is described as counteracting this with greater connection to the outdoors, and architecture to promote a modern and sustainable lifestyle.

The large kitchen was situated to take best advantage of an adjoining food garden and orchard.

“My clients had an extremely tight budget but wanted something unique that worked in harmony with their mid-century aesthetic,” Wernham-Doo said.

“The existing house had good bones but was poorly arranged.

“We saw this as an opportunity to repurpose demolition material and craft it into something distinctive.

“Rimu framing was repurposed to highlight the joinery and features like the tiled hearth designed by abstract artist David Brown.”

The kauri for the kitchen island had been in the family for some time as an outdoor bench. Ian Rattray of IR Group Ltd was commended in the commercial/industrial interiors category for its classroom modernisation at Wainuioru School Classroom, in rural Masterton.

Master Painters chief executive Brian Miller said Palmer’s rework of an exterior of character was a top award to win because there were hundreds of villas all over New Zealand being renovated and painted, so to win there had to be something very special.

“The customers have received a very, very good job so as we consider the rankings for each category we are looking for tiny points of difference,” he said.

This year, the judges noted that shades of blue, particularly teal, and soft greens were popular and bold colours were often chosen by property owners.

Palmer did a complete colour change of the villa to soft greens.

“There was a lot of technical work required in this job because of colonial glazing on most of the windows which required a high degree of precision detail and this was a reason it took the top award.”