The Carkeek Observatory in its present state. PHOTO/FILE

The Carkeek Observatory, built by retired statesman and Featherston sheep farmer Stephen Carkeek, has now been awarded Category 1 status by Heritage New Zealand, after a lengthy campaign to secure the historically-significant site for future generations.

Coming after this news, the Wairarapa Dark Sky Association [formerly Martinborough Dark Sky Society] said they now want to construct a replica nearby, where people could experience the simple pleasure of amateur stargazing, as it was for Carkeek when he built the observatory in about 1867.

Carkeek used totara timber, and constructed it according to the Romsey style, which was developed as a low-cost model for amateurs by the English inventor Edward Berthon.

Berthon said the design should be able to be built “by any village carpenter … in less than a fortnight”. 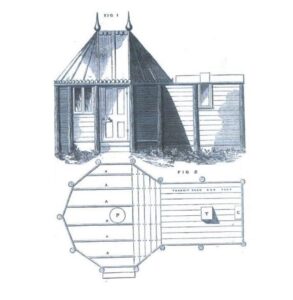 The plans for the Romsey observatory, drawn up by English inventor Edward Berthon. This was the style used by Stephen Carkeek in Wairarapa. The proposed replica could look similar to this. PHOTO/HERITAGE NZ

Carkeek’s lightweight timber structure, located just outside of Featherston, consisted of an octagonal room, with a revolving canvas dome, with a rectangular room attached where he could accurately map the transits of various planets [these aspects are seen in Berthon’s plan, pictured at right].

Viv Napier, chairwoman of the Wairarapa Dark Sky Association, said the organisation “would love to create a replica which can be visited by the community”.

“We are keen to work with South Wairarapa District Council, the owners of the site, to preserve and improve the site for future generations of astronomers.

“A working replica of the mid-19th century building, built from totara beams and planks, iron railings, and wheels for revolving the canvas viewing dome, would add to the site’s sense of history.”

Kerryn Pollock of Heritage New Zealand, who authored the 45-page report in support of the observatory’s Category 1 listing, was enthusiastic about the prospect of a replica.

“Heritage New Zealand would be very interested in actively participating in a project like that, and we would be able to give advice for where an appropriate place would be for such a replica.

“There’s real potential for a good interpretation of that wider site. We have enough information, like the listing report and other research, that can tell us what his observatory would have looked like.

“I think it would be a great project to replicate it.”