No place for a slow start Nikora Ewe has returned to Pioneer after being part of the 2019 champion Martinborough side. PHOTOS/FILE

It’s six years since Eketahuna was the last club north of the Waingawa Bridge to win the Tui Cup. It’s 11 years since a Masterton club – Red Star – was crowned champions. Can the dominance of the southern clubs be ended this year? Times-Age sportswriter Chris Cogdale looks at the prospects of the province’s northernmost premier clubs.

Boosted by return of top players

The blue and reds have returned to the premier division after a two-year absence and under the coaching of former Wairarapa-Bush utility back Nathan Riwai-Couch and former Cook Island international prop Stan Wright, are setting their sights high.

“Like every other team we’re not in it to just be happy that Pioneer’s back in the first division. we want to stamp our mark and win the competition,” Riwai-Couch said.

“But in saying that, it makes it hard for our club with the boys having to connect back together. I want the boys to have fun and enjoy it and get the most out of the season.”

The return to the top division has lured several past players back to Jeans St, including Nikora Ewe, Reece Calkin and Himiona Haira from Martinborough, Shayne Harmon and ‘Buddha’ Mason from Greytown, and Oakland Dean-Pene from Carterton.

“It’s good to have those boys home,” Riwai-Couch said. “They bring experience and work ethic to the team.

“Pioneer got the opportunity to be back in the top division, and the players jumped at the chance to come home.”

Riwai-Couch said the pre-season was a bit of a mixed bag.

“We were training really good and we had a good hit out before the lockdown. Since then we’ve had a game with Eketahuna, which was pretty much a getting-back-together-type game, and then we played the other three clubs [Marist, Gladstone, and Martinborough] which I thought was a great concept.”

As for the impact on the truncated nine-week competition, Riwai-Couch said: “It’s going to be no-holds barred, and if you lose two games early it’s going to make it difficult.”

Most of all Riwai-Couch is just pleased to have premier rugby back at Jeans St, and he was looking forward to having the support of big vociferous crowds at the venue.

Matenga in charge after 20 years Bryan Arnold is one of three options at half back for East Coast.

Aaron Matenga has returned after 20 years in Australia to take the coaching reins at his old club East Coast.

Matenga, a prop who played four games for Wai-Bush in 1998-99, has former reps and club stalwarts, halfback Mark Percy and hooker Dion Mitchell as his assistants.

After a few lean seasons, in which the club has failed to make the top four, Matenga has set some simple targets.

“It’s all about improving, that’s our main goal and moving up the ladder a bit, and the boys are progressing nicely at the moment,” he said.

“It’s about getting our systems in place first and developing these players and we’ll see what the outcome is after that.”

Matenga has put together a useful squad, which he said is a good mix of older heads and younger players.

One area where the Coasties are strong is at halfback where they have three quality first choices.

Former Wairarapa College star Cameron Ravenwood has returned from Christchurch where he has played premier grade and will captain the side. Rep halfback Bryan Arnold and Guy Percy are other options to wear the number nine.

“We’ll just move them around the backline a bit to see what suits our game better,” Matenga said.

Brothers Joseph and Adam Gordon are others who could front for the Coasties having moved from Carterton, however Matenga said the pair’s priority is their competitive shearing.

Like the other coaches, Matenga predicted a tight competition over the truncated season.

“I think it will be close all the way round actually. Everyone’s on the same leg, it’s basically do or die.

“Once you start losing a few games you’re out, but I think it will be really tough.” Soli Malatai brings pace and unpredictability to the Marist backline.

Marist have often promised a lot over recent seasons but failed to deliver.

Could the championship drought dating back to 2002 come to an end in their 75th anniversary?

Coach Gerald Lologa has assembled a talented squad boosted by some important recruits.

Brothers Joe and Peter Beech are likely to be the first-choice locks and both bring a wealth of experience.

Joe played nine games for Wai-Bush in 2013-14, captained University Old Boys to victory in the 2015 Jubilee Cup championship in Wellington, and played semi-professionally for Stirling County in Scotland. Peter played for the London Irish amateur side.

The return of veteran lock-loose forward Corey Reid, who played 18 games for Wai-Bush from 2005-2009 adds more power to an impressive forward pack.

One big blow for the early part of the season is the loss of NZ Heartland representative James Goodger.

The talented loose forward-lock dislocated his troublesome shoulder in a pre-season game last Saturday and will miss the first four weeks.

The return after a season in Wellington of speedy winger Soli Malatai adds spark and unpredictability to the backline, while midfielder Leo Eneliko and hooker Henry Wilson are others returning after missing 2019.

Manager Mark Brown said there was plenty of depth in the squad.

“If anything, we’ve got a good problem to have. We have a squad of about 29, so some people are going to be a little disappointed come Thursday night’s training, and that’s a good position to be in.”

“I’m aware some other clubs have had players make themselves unavailable because of how late it’s going. “That extra month into August catches those people out, like the farmers and other seasonal workers.”

However, Brown said they could not afford a slow start.

“You’re probably going to need to win five games to make sure you’re going to make the semis.

“We want to be competitive and want to give ourselves the best opportunity. We’re certainly targeting top four as a minimum and then win one game and you’re in the final.” 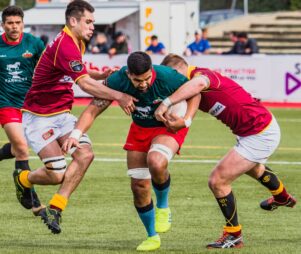 The 2019 winners of the Moose Kapene Cup for leading after the first round, and beaten semifinalists, Eketahuna will front with a near representative forward pack, but it’s a lack of depth in the backs that has coach
Wayne Roach concerned.

Influential centre and last year’s captain Robbie Anderson has still not recovered from an ankle injury that curtailed his 2019 representative season, promising first-five Josh Pepperell pulled the pin on the season this week, and halfback Lee Thompson has just returned to training after hernia surgery.

“We’re under an injury crisis at the moment, we’re a little bit short in the backs,” Roach said.

“We’re about even with last year really – we’ve just lost one or two backs and to get Robbie on the paddock is the big one for us.”

There will be an Anderson on the field though, with Robbie’s older brother Jeremy set to take the halfback role.

Eketahuna’s traditional strength has been in the forwards and that will be no different this season.

Tom McKay, a lock from Lincoln University and Canterbury Under-19 representative, moved to the region before the covid-19 lockdown and will play the season here.

Roach was pleased with Eketahuna’s only pre-season outing, won 26-12 over Pioneer, and was targeting a top-four finish. He was excited about the short season.

“It’s awesome, it’s like a bloody sprint isn’t it? You’ve only got those seven games, and I wouldn’t say a loss early would be a harm, but you don’t want to be behind the eight ball, do you?”