No excuse to lack PLB Can you put a price on your safety?

Probably not, but if you were to, it would likely be higher than $5 – which is the cost of hiring a Personal Locator Beacon [PLB] from the Masterton Trust Lands Trust building. 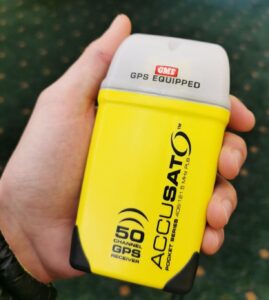 The Wairarapa Search and Rescue Trust is encouraging walkers and trampers to hire a PLB when they head out, and has started a new campaign to get the word out about the beacons, which are available for $5 aday, or $30 a week.

He has been involved in hundreds of operations in the Tararua, Remutaka, and Aorangi ranges since the late-1970s, and was keen to stress the importance of always carrying a PLB, even on one-day walks.

“It gives them peace of mind that they’re going to get found if one of their party gets injured,” Milligan said.

“It’s a thing of last resort, if you think you can’t get out.

“Generally, if they’ve broken a leg or something like that, it’s up on the rougher tracks, where there’s no phone signal.”

Milligan said that random injury was as big a factor as getting lost deep in the bush.

Even on relatively easy walks, if you break your leg and there’s no one around, you’re not going anywhere.

Once the PLB was activated [as simple as flicking a switch], it connected to a satellite, which would contact one of two receiving stations, located in Australia or the central North Island.

This signal would then arrive at the Rescue Co-ordination Centre in Avalon, Lower Hutt, which would eventually get to the Wairarapa Search and Rescue Trust which sends out volunteers, with a helicopter dispatched from either Wellington Airport or Palmerston North.

“The rescue helicopters are funded through sponsorship, you’ve got a Westpac helicopter here, so the banks give them money,” Milligan said.

“They also do a lot of fundraising in the regions they service, and they get donations from the community, by organising a sports event, or a dinner, with the proceeds going to the rescue helicopter.”

Milligan said it cost about $3000 to fly the helicopter during one rescue operation.

PLBs are available to hire from the Masterton Lands Trust building from 8am to 4.30pm, Monday to Friday.