Nine years in prison for 82-year-old Victims thanks for courage in court

For the victims of an elderly Masterton sex offender, justice has been “a long time coming”.

Mitchel Hemi, better known as Diesel or D, appeared in the Wellington District Court for sentencing in front of Judge Jan Kelly on Wednesday morning.

The 82-year-old appeared dressed in a suicide vest and blanket, his only personal affects, having been taken into custody from a hospital on Tuesday night.

He was out on bail when further historical charges were laid in December that year.

In August he pleaded guilty to 37 charges of sex offending against four boys from between 1978 and 2000. 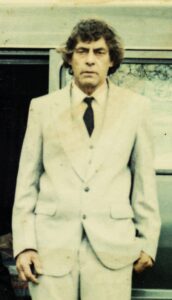 Mitchel Hemi, better known as Diesel or D, as he looked in the mid-1990s. PHOTO/SUPPLIED

Three of the four victims, each granted permanent name suppression to protect their identities, read out their victim impact statements outlining the harm caused by Hemi — the fourth had a statement read out by Crown prosecutor Rushika De Silva.

One victim said his trust in people was completely gone and his childhood innocence had been stolen.

“The effect [the abuse] has had on my life and my family’s life is unbelievable.”

From the dock, Hemi said he was sorry.

Another said he hadn’t really understood what was happening at the time because of his young age but better understood the abuse as he got older.

“He killed my passion for anything I loved as a kid and I hate him for that.

“Because of what he did, I feel it has taken part of my identity away.”

One victim said he was just glad it was over.

He still struggled with flashbacks from everyday items which reminded him of Hemi.

Each described the ways they had struggled with substance abuse and in their family relationships, particularly with telling their parents and caring for their own children,

One had also suffered serious health issue and complications arising from the sodomy charges.

Judge Kelly thanked the victims for their “courage” in sharing.

During sentencing she listed the premeditation and manipulation involved in the offending as aggravating factors, as well as threats of violence which included making the boys “disappear” and “putting a tapu” on them if they told on him.

The scope of the offending, harm caused, and breach of trust were also considered.

“You stole their childhood and trust,” she said.

“You manipulated and groomed them.”

She considered a starting sentence of 14 years appropriate, offering a 30 per cent discount for Hemi’s poor health and age.

A 20 per cent discount for guilty pleas was also offered as going through a trial would likely have caused further emotional harm to the victims she said.

She sentenced Hemi to nine years imprisonment and his name to be added to the child sex offender register.