New trains will be reality KiwiRail diesel engines are set to be replaced by self-contained four-car trains [that could be fully electric]. PHOTOS/FILE

Electric units could be ordered by late 2021

Track upgrade will go ahead 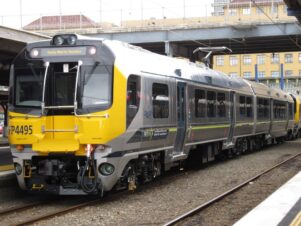 It’s finally happening: Greater Wellington Regional Council has secured $5 million from the New Zealand Transport Agency for a “detailed business case” for new trains on the Wairarapa line and the wider region, which could be ordered by late 2021.

NZTA is funding this initial stage of the project in full, enabling the councils to complete a detailed study before procuring the new trains – expected to cost about $300 million.

For the line’s peak time, patronage had increased even more than that: 24 per cent over the same 10-year time period.

“The detailed business case will kick the tyres on a whole range of things, including the requirements for the vehicles that we’re looking at,” chairman of the regional council Daran Ponter said.

The study will provide in-depth analysis of the different upgrade options – diesel, electric, battery-powered electric, or dual voltage; and how many units will be needed, particularly as cost is dependent on order numbers, with more trains bringing the price down considerably.

“The Crown has also committed money for a stabling facility in Wairarapa, to store and maintain the trains, but the question is where should that be exactly? Masterton? Carterton?

“This exercise will give us the opportunity to ‘press go’ on a purchase order, probably late in 2021.”

The later purchase cost of about $300 million would be split among GWRC, Horizons, and the Crown.

“The trains we are likely to order probably won’t be much longer than the ones that we currently have, but they will be multiple units, fully contained, not dragged by a locomotive.

“The initial design consideration was for 15 four-car sets [individual trains]. Those are multiple units with the engine built into the unit, so they won’t be hauled by KiwiRail at all.”

Ponter said the order could potentially be as high as 25 four-car sets, so as to prepare the region for a forecasted population and rail commuting growth.

“If we place an order that’s too small, it would mean we’d may be coming back in 10 years for another order, and if you start placing really small orders, the cost goes through the roof.”

The purchase request will go out into the Government Electronic Tender Service [Gets] which is likely to seek oﬀers from several European, Chinese and South Korean manufacturers.

The electric units used in Wellington are manufactured by South Korean company Hyundai Rotem – which could be the same trains we see in Wairarapa.

The coming rolling stock upgrade, which this study complements, will be independent of the larger $211 million going towards track upgrades in Wellington, Wairarapa, and Palmerston North.

As Ponter said: “Even if we stayed with some of the current trains that we’ve got, the Wairarapa Line is massively overdue for a total refurbishment. [The track upgrade] is definitely going ahead, irrespective of whether we buy new trains.”