New recruits eager to get out and help 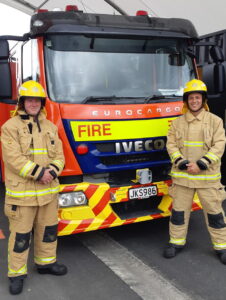 Hearing a loudly wailing emergency siren is a common occurrence in Wairarapa.

When this takes place – which could be any time during the day to the early hours of the morning – what residents would have heard is the summoning of their town’s volunteer fire brigade to an emergency.

At any of those moments, a fire and emergency volunteer could be at work, out for lunch, or even asleep.

The moment that sound hits their eardrums, they drop whatever they are doing and rush straight to their station ready to tackle whatever emergency lies ahead – which could range from a house or scrub fire, medical emergency, or a crash.

And with these types of events increasing across the region of late, there’s no denying the importance of volunteer firefighters and their work to keep the region safe.

Volunteer firefighters make up the majority of Fire and Emergency personnel in Wairarapa.

There are 13 Fire and Emergency stations across the region with 12 of them primarily volunteer brigades.

The Masterton station is manned with career and volunteer firefighters.

To keep up with the hard work needed to fight these daily battles, recruitment is key for Fire and Emergency.

But to be able to withstand the ‘heat’, you would be put through your strides as four of the latest volunteer recruits to the Greytown and Carterton fire and emergency stations have found out.

Dave Stephenson and Harry Newton [Greytown] have both been training to become firefighters for over a year now.

They both graduated in mid-January.

Stephenson, a property specialist for Property Brokers in Greytown, and Newton, the vicar of Greytown, went through some intense training in that time.

But both said it was well appreciated as they’d already had to deal with so many incidents within that short window.

“We only graduated a few weeks ago, but we’ve seen a lot already,” Stephenson said.

Newton recalled one difficult moment at the Woolston Fire Training Centre in Christchurch – where both men trained – where he went through a Breathing Apparatus Training Building course which put him in a tight situation in an over-heated tunnel.

“We were put in a little narrow tunnel that was dark and about 60 degrees Celsius.”

“We had to crawl through it with a breathing mask on and oxygen tank on so we could barely fit. But to be honest, it was great fun.”

Both men said the reason they put themselves through that intensity was to give back to the Greytown community they dearly love.

Like their Greytown comrades, Caitlyn O’Neale, 19, and Charlee Gooding, 18, wanted to give something back to the Carterton community and felt being part of their fire brigade was the way to go.

“I worked in the Carterton New World for three years, so I got to know my community and I wanted to help them,” O’Neale said.

“The fire station is only across the road, so I’d hear the siren go off and see everyone turn up and I just wanted to be a part of that.”

Gooding said her parents, both part of the Mataikona rural fire brigade near Castlepoint, inspired her to keep volunteer firefighting within the family.

“My parents encouraged me to join,” she said.

“I’m in town most of the time so it made sense to do some urban and be part of the Carterton brigade and I’ve really loved it since then.”

Both girls juggled school, work, and training to become volunteer firefighters and were now looking forward to their chance to get on a truck.

“I don’t live close to the fire station so haven’t got there in time,” O’Neale said.

“The guys are pretty quick getting there, so I need to be faster, but I’m trying,” said Gooding.

“I am looking forward to being able to play my part in helping.”