INDUSTRY INSIDERS: $100 rent hikes predicted, and a spike in rentals for sale due to new policy

A Wairarapa real estate agent says the government’s newly released housing tax policy will lead to “a tsunami of homelessness”.

With a chronic shortage of available homes and a growing population, government policy aimed at helping home buyers could be coming at the expense of some of society’s most vulnerable –
long-term tenants.

Chris Gollins of Gollins Commercial, which has an office in Wairarapa, said his company was bracing for a flood of residential property investors selling up, leaving tenants with nowhere to live.

He said there were already two residential investors in Wairarapa selling portfolios of 14 properties in total.

They are selling to first homeowners and giving tenants notice to vacate.

“Wednesday’s extension of the bright-line test will accelerate that process nationwide.”

He said an increasing number of residential investors were selling up due to the combination of extra costs and responsibilities, including paying more tax.

“This will unquestionably lead to more residential investors bailing out. There will be far fewer properties available for rent. It also means rentals will become more expensive.

“Those who will benefit most are moteliers,” he said, referring to Ministry of Social Development’s placing of homeless people in short-term commercial accommodation.

“It’s a sledgehammer approach, and I’m not sure all the consequences have been thought through.”

Of two headline tax policy announcements, perhaps the most impactful for residential investors would be the removal of interest deductibility.

At present, like other business-owners, property investors only pay tax on their income after expenses are deducted.

For many, mortgage interest would be a big, if not the biggest, expense.

The full removal of interest deductibility from October 1, 2021 will apply to all investment properties [with a possible exemption for new builds] bought on or after March 27.

This change will be immediate for new rentals but phased in over four years for existing ones.

The Times-Age understands some Wairarapa landlords have contacted real estate companies about selling off their rental portfolios after the housing policy announcement.

The second change is the extension of the ‘bright-line’ test.

At present, profits on properties sold within five years of being bought are taxable.

This would be extended to 10 years for existing properties but would remain at five years for new builds.

This would apply to residential investment property bought on or after March 27.

Jason Osborne is managing director of Wairarapa-based Osborne Group and a Fellow of Chartered Accountants Australia and New Zealand.

“I think it’s a game-changer. Wairarapa will be affected along with the rest of the country,” he said of the announcement.

“Interest deductibility is a massive factor and will affect everyone. All residential investors will have to assess their personal situations.”

He said it was still too early to say exactly what the effect would be.

“Individual investors will each have to evaluate their strategy.”

He said there were risks for people getting into the market relying on low interest rates.

“Any change will affect borderline investors.”

He said people could consider shifting their investment away from residential property into shares, businesses, or commercial property.

“Some people will not be affected if they are holding for the long term.”

Osborne agreed tenants would be negatively affected as landlords passed the cost of tax changes on.

“There are concerns about the price of rentals going up.” 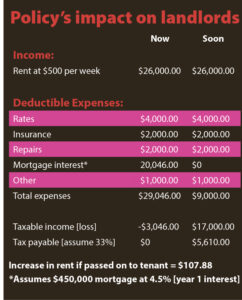 For a landlord with a mortgage of $450,000 on a single property, rents could rise more than $100 a week to compensate for the tax changes [see table].

Mark Childs, sales manager for Ray White Wairarapa said although the changes could be positive for first time buyers, structural problems in the market remained.

“The major issue is still supply,” he said.

He said the impact of the changes would be felt differently, depending on circumstances.

“Are existing investors going to retain or sell? It will be down to individual investors.”

Childs said investors with low debt ratios would be less affected by the interest deductibility change.

“If anything, the changes will impact some mum and dad investors more.

“Low interest rates and low supply still remain as key drivers in the housing market. This has not changed,” he said.

• Profits on residential property sold within 10 years [five for new builds] after being bought will attract income tax on profit made through the property increasing in value.

• Inherited properties and those which have been the owner’s main home for the entire time they were owned are exempt.

• Property owners will not be able to claim interest on loans used for existing residential properties as an expense against their income from those properties after October 1, 2021, with the phased introduction described below.

• The government will consult on the detail of this legislation.

• Such deductions on residential investment property acquired on or after March 27, 2021 will not be allowed from October 1, 2021.

• Interest on loans for properties acquired before March 27, 2021 can still be claimed as an expense but will be reduced on a sliding scale over the next four income years until completely phased out.