Just how does someone with no prior farming experience or knowledge of living rurally help transform a coastal sheep and beef property in a multi-faceted operation with a strong brand?

That’s a question that Lisa Portas hoped to help answer in her recent research project undertaken as part of Kellogg Rural Leadership programme.

Portas works as the expansion manager at Palliser Ridge, a South Wairarapa farm where she lives with her husband, the farm’s manager, Kurt Portas. 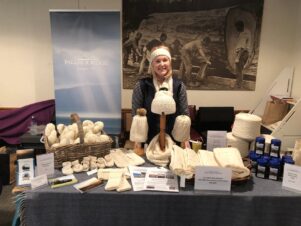 She moved to the property 10 years ago and in 2013 the couple were made shareholders.

Since then the farm has gone from strength to strength, diversifying and strengthening its brand through the launch of the Woolshed Store, Palliser Ridge Farm Tours, and on-farm accommodation, Kaikoura Lookout.

“We kind of just figured it out as we went along which sounds really bad,” she said. “That’s why I wanted to do some research for someone like me at the beginning. I wanted them to have a starting point.”

At the suggestion of the farm’s owners Marilyn and Jim Law, she applied for the programme to further her education – they provided most of the funding and the rest was made up with a grant from the John Daniell Memorial Trust.

Her report, Farmer Storytelling: Navigating our Narrative, explores the gaps and impacts of storytelling in the New Zealand agricultural sector.

“I thought it would be a neat thing to do. Though it’s industry-related, it’s quite wide.

“I knew that I wanted to do something that would encompass traceability and what our business was doing with the outside world.”

She found there were seven key components to storytelling:

Seven farmers, who were successfully taking a product from its origins on farm through to an end consumer, were also interviewed about the way they incorporated storytelling to achieve this.

They came from a wide variety of sub-sectors in agriculture, including sheep, goats, beef, dairy, wine and horticulture.

She found that the businesses placed a greater emphasis on being environmentally sustainable, caring or having a focus on the people within the business and having a transparent and ethical product or way of conducting business.

“A common theme amongst the survey respondents was the need for farmers to tell their own stories, and that it was predominantly urban New Zealand who needed to hear them.”

The most desired impact by those surveyed was that of understanding and trust building.

“It was all about people. That was a big part of the authenticity,” she said.

“If people can hear it from the horse’s mouth, that element of trust changes.”

The most important aspect of impactful storytelling was a sound understanding of one’s audience she said.

“Knowing your audience is very valuable.

“Sometimes when we are telling stories we’re are telling them to people different from us or who don’t have the same backgrounds.”

This is particularly important because of a growing perceptual divide between urban and rural communities.

“It’s different now because everyone used to have an uncle or someone out on the farm they could connect with. There’s definitely a gap there,” she said.

Coming on the back of a year in which farmers felt beat up by the country in relation to several proposed legislative changes and a perceived public backlash, concerns about negative perceptions of the industry was clear in the research.

“This was done on the back of freshwater, when the rural community was under pressure.

“The introduction of regulation, around the Zero Carbon Bill, Fresh Water Reform and land use restrictions have caused a number in the primary sector to feel concerned for the future of their businesses and communities.”

Portas said the research could be applied to communicating ideas to several groups including making submissions in relation to proposed legislative changes, educating those outside the industry and encouraging the next generation of farmers.

She also highlighted the value of social media as a means of communicating because of its ease, low cost, accessibility direct to the audience and level of control available to those telling the story.

“There’s a generation who are quite comfortable with social media.”

Those surveyed also valued flexibility in adapting their marketing plans.

The on-farm tours available cater to a range of people, from agricultural groups interested in the day to day running to tourists who want to see sheep being shorn and get a photo with the dogs.

Those around the region will have the opportunity to experience it for themselves, come March 1.

Palliser Ridge is one of several farms which will open its gates to the public as part of the Open Farms Day initiative.