Volunteers were waist deep in the water during the annual kakahi monitoring survey day at Western Lake Reserve in Lake Wairarapa on Sunday. PHOTOS/PETE MONK.

When your very survival is dependent on hitching a ride, it is critical that one is available.

But, for the native New Zealand mussel, kakahi, in Lake Wairarapa, there just aren’t many cabs waiting on the rank.

As a result, this small, but important little creature faces an increasingly uncertain future.

Evidence that this is the case was confirmed during the annual kakahi monitoring survey day at Wairarapa Lake Shore Scenic Reserve on Sunday.

Although plenty of adult kakahi were located in quick time, less than a handful of the juvenile mollusc were discovered.

McEwan said although the results were not surprising, it was deeply troubling for the long term future of the species in the region.

McEwan said the main problem facing kakahi populations was likely a lack of native host fish species – their favourite being the koaro – to facilitate successful reproduction.

As host fish, they act like a taxi whereby kakahi larva, called glochidia, are sneezed out by their mother and latch on to a passing fish using a hook at the top of their shell.

An explosion of pest fish in the lake such as perch, rudd, and brown trout have decimated native host fish populations, hence the scarcity of juvenile kakahi, McEwan said.

“In order to replace the existing population, there needs to be a lot more juveniles.

“It is a big concern, but it is not a new thing, we have known that ever since we started this programme.” 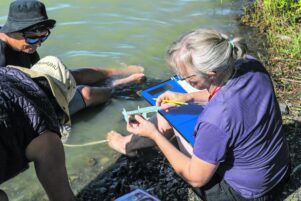 Kakahi are measured before being returned safely to the lake.

Sunday’s monitoring involved about 35 people, mainly volunteers, measuring and recording information about the kakahi and returning them safely to the lake.

The survey alternates between two sites at Lake Wairarapa – Lake Domain at the top end of the lake and Wairarapa Lake Shore Scenic Reserve on the Western side.

The kakahi measured ranged in size from 4cm to 6cm, which puts them at about 20 to 30 years old, McEwan said. Juvenile kakahi are much smaller, so volunteers scooped up substrate and sieved it, looking for the tiny shells. Only four juveniles were found.

Paul Curry, a veteran of five kakahi counts, said the search for juveniles was “like looking for gold”.

Compared with the other volunteers, he was richly rewarded, finding two of the four juveniles.

Historically, kakahi have been very important to Maori.

They were a source of food and their shells were used as tools.

One kakahi can filter about one litre of water per hour.

In the past, large beds of kakahi probably helped to maintain the clarity and ecological health of New Zealand’s waterways, McEwan said.

“The future [for kakahi] is looking really bleak at the moment, they really need some help.”

While there are other significant factors contributing to the population decline of kakahi in Lake Wairarapa such as sedimentation and high nutrient levels in the lake water, reducing pest fish numbers could help.

The kakahi monitoring programme is one of several projects under way at Lake Wairarapa as part of the Wairarapa Moana Wetlands Project, a joint initiative of Greater Wellington Regional Council, the Department of Conservation, South Wairarapa District Council, Kahungunu ki Wairarapa and Rangitane o Wairarapa Inc.

The project began in 2008 with the aim of enhancing the native ecology, recreational and cultural opportunities on public land in the area, and includes restoration work at Onoke Spit, Lake Domain Reserve, Donald’s Creek as well as Onoke/Okorewa Lagoon.

Wairarapa Moana is one of the largest remaining wetland complexes in New Zealand and has ecological values of national and international significance.