Daniel Nel in Lower Hutt in the 1980s. PHOTO/SUPPLIED

Saturday marked Daniel Nel’s second year in Masterton, and the journey that led him here is one marred by grief, warmed by hope, and held together by unbelievable resilience. ARTHUR HAWKES reports.

He studied photogravure in South Africa, a printmaking technique, and left for London to avoid military service.

After an attempt to work in Canada was denied, he saw a job listing at the New Zealand Herald in Auckland. He took the job and quickly cemented himself as a skilled printer.

Two years later, he was on the road with a different company, travelling to Wellington regularly for printing sales.

Nel convinced the board to set up another factory in Petone, which he ran from 1980.

Through a toxic work culture, and an uncompromising executive, Nel quickly grew dissatisfied.

Flicking through the paper one day, he then saw an advert that would change his life forever: an orchid show at Manners Mall in Wellington.

“I’d never even seen an orchid, and I was completely and utterly blown away.

“I was absolutely fascinated: I met a few orchid growers, went to a few meetings, and that led me into a completely different part of my life.”

Eventually, the factory in Petone was turning over $1 million a year, but Nel was being asked to make changes he didn’t want to make.

Not wishing to compromise his integrity, Nel walked away from the company, and his high-powered career, in 1986.

Of all places, he then worked in a garden centre, where he’d make pottery and sell the odd plant, but the business collapsed from the Black Tuesday stock market crash in 1987. Once again, he had to restart everything. 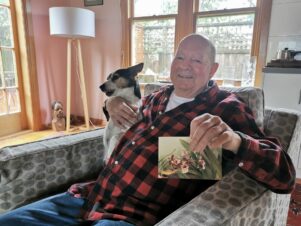 Daniel Nel and his dog, Missy, with a picture of one of the rare orchids he bred, Vuylstekeara. PHOTO/ARTHUR HAWKES

“At this point, though, I was becoming known among orchid growers because I took on a challenge to grow a specific orchid in this country, because nobody else was growing it.”

Vuylstekeara Cambria Plush was a rare variety from the Netherlands, although rarely grown successfully.

Over a few years, Nel’s fledgling orchid business grew to 15,000 plants, to be exported to Japan, contained in a 3000m2 glasshouse in Upper Hutt.

Nel planned his big sale down to the dollar, and knew he’d make a return on the crop within a year.

“It takes two years to get clones back from the laboratory, and it takes five years to get a decent flower, so it takes seven years to sell an orchid – and I’d extended myself on my credit card, my debt, everything.”

In January, 1997, at the time of the sale, the New Zealand Dollar hit an extreme high, and the Japanese economy collapsed.

The orchid sales plummeted and the business caved.

Nel was left with nothing.

Penniless, he then moved in with a friend in Sydney. Slowly, he found his feet, again working in printing, again plunged into toxic work cultures.

Nel’s saving grace was his connection to the gay community in Sydney, particularly his friendship with a pilot called Malcolm.

“I lived in Darlinghurst, which was the centre of the gay community. Malcolm was in my group of friends, and was working for ACON [AIDS Council of New South Wales] – he also had AIDS.

“So, in the meantime I looked after Malcolm, who was dying.

“He worked until he couldn’t, and when he couldn’t he went into the hospice.

“I would go and visit him every weekend, and take him out in his wheelchair.”

Nel was one of Malcolm’s few visitors, and explained how many people were reluctant to visit him, either through prejudice, or through the fear of seeing where their own diagnosis would take them.

“It was horrible, if you know what skin and bone is, if you’ve never seen that; don’t.

“The teeth, the jaws, everything just disappears, because they can’t eat, and there’s just nothing you can do about it. They lie in bed with nappies.”

Malcolm died in June of 2007, where his memorial was attended by Nel and the Australian jazz drummer John Morrison among others.

Shortly after, Nel’s father fell ill. With only a few thousand dollars to his name, he then had to clean himself out to buy return flights to South Africa.

It would be the last time he saw his dad.

“So, I went to South Africa, came back … and then bought a Lotto ticket, which was a tradition – I only bought the big Saturday draws.”

Nel, still struggling for money, and coming to terms with the death of Malcolm, sat on the ticket until December, and then checked it at the dairy near his small flat.

“My life changed completely. I’ve been retired ever since.”

With a little under $2m, Nel moved to Gympie, Queensland, where he took up garlic growing, and then finally settled in Masterton, two years ago today, where he enjoys his retirement with Missy, a three-legged Jack Russell.