Zadie, 9, and Reva, 3, de Silva, with mum Sonali, checking out a drum machine powered by a carrot. PHOTO/SUPPLIED

Playing a piano by banana via a computer programme, hooked up by an electrical circuit was proved possible at Monday’s formal opening of the new Masterton Library Learning Centre.

The centre consists of three relocatable buildings that are next to the library. Fab Lab have set up there permanently to demonstrate and educate people about modern computer programming, design and print options.

Many visitors to the open day enjoyed a butterfly or skull and crossbones shaped pancake that had been shaped by a computer programme.

Timed for the first day of the school holidays, streams of children lined up to see the pancakes made on a Fab Lab 3D printer and to eat them.

Inventor of 3D printers, Vik Olliver had programmed in the computer shapes and the pink pancake mix ‘ink’ was squirted down on to a hot element. He had saved his designs on to a USB stick and inserted it into the printer, it read it and ‘hey presto’ it printed an edible butterfly.

In another lab, children were making 3D objects from plastic or bits of wood. The pattern can be drawn by anyone via the computer programme and sent to the 3D printer.

In the third building of the centre, children were playing virtual computer games and musical vegetables. 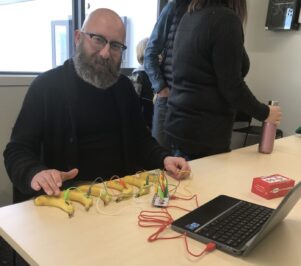 Newly appointed Masterton Library and archives manager, Corin Hayes played Twinkle Twinkle Little Star on six bananas. He had an electric conductor, that was connected to a computer, attached to his finger and the bananas each had electrical wires attached. When he touched the bananas, they made notes according to what sound was recognised by the computer.

“The three new spaces are great for the holiday programme to expand into,” Hayes said. “Fab Lab are here for the long-term and offer a way for children to learn about science.

“The three spaces are for people to generate and incubate ideas and to learn.”

Hayes is aiming for the largest building of the three to be booked by groups that want to hold workshops or meetings. He also sees the space as a good hangout area in the summer. More signage is to go up shortly.