Scott Robertson was preparing to turn into his Carterton High St driveway on Wednesday at 10am when a driver smashed into the back of his car that was transporting his nine-week-old baby.

He was not injured but his partner and mother of baby Mika, Stacey Swift, had bruised ribs and was in shock. Their baby was unharmed.

Robertson, 29, said he had pulled slightly to the left and was indicating to turn right when the car hit him and pushed his car 10 metres forward.

Swift, 28, was shoved into the dashboard and was checked over by Wellington Free Ambulance paramedics. 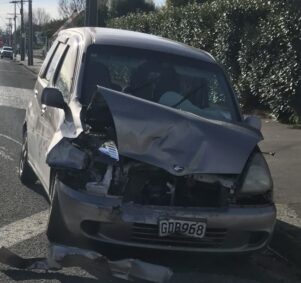 The damaged car of the driver police said was at fault.

Mika was in a capsule in the back seat.

“I’m just shaking. Our baby is fine, but I have two other children and am grateful they were not in the car.”

Robertson said Swift was already feeling vulnerable after just having had a baby and he was upset at the driver. They had just come back from a trip to Masterton for some shopping.

Robertson was upset their only car had been badly damaged.

“We don’t have the money for a new car, and he [the other driver] isn’t insured.

“Things have been tight for us after the covid-19 lockdown and our insurance wasn’t up-to-date.”

Swift and Robertson intended to make victim impact statements and take the matter to court.

“Not only could he have killed us and our baby, he has taken away our family car,” Robertson said.

Grandmother Fiona Robertson said the police were “wonderful” and were very clear with them that the crash was the fault of the driver that hit them.

The driver told police he was distracted because he was adjusting his car radio.

A Givealittle page for the family has been created: https://givealittle.co.nz/cause/family-of-five-without-car-after-accident.