Moylan and Mita star with wins Corban Mita, at back, knocked out his first-round opponent. PHOTO/PAUL RUSHBROOK

Mita, from Masterton’s Undisputed MMA gym, knocked out Christchurch’s Shawn McQuaide in the first round much to the pleasure of the sellout crowd.

Fortitude Gym owner and organiser Zane Hopman said: “It was just relentless pressure from Corban, and the other guy couldn’t get any rhythm and couldn’t deal with his movement.” 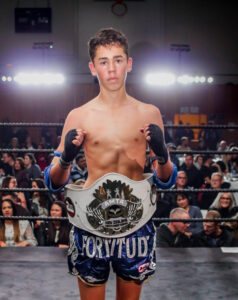 “Boston had a flawless performance. He’s just come into his own in the last six weeks camp, and he put on a really stellar performance,” Hopman said.

“He executed the plan flawlessly, and it was really pleasing to watch from a coach’s perspective.”

The main bouts were supported by several corporate boxing bouts, and Hopman was impressed with what he saw from the novices.

“They were all hard fights, and they got to see what it takes to jump in the ring and realised what’s required to go the distance with other people keen to have a good crack at them.

“Everything was very, very close, and you could kind of flip a coin on most rounds. I was very impressed with how everyone trained and how they turned up and fought on the night. It was really good.”

Hopman is uncertain how much money has been raised for mental health support in Wairarapa, but he is thrilled with the public response to the popular event.

“There were no real hiccups, just a few minor technical things which you just accept and roll with.

“I was happy to see the excitement of the crowd and there were smiles all around and lots of loud supporting fans for their family members.”