A model of the new waterslide for Carterton’s outdoor pool – for which Molly is fundraising. PHOTOS/SUPPLIED 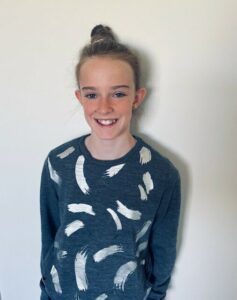 Molly O’Dwyer is proof that you’re never too young to participate in local democracy – and to make a difference in your community.

Last summer, during her many trips to the free outdoor pool, Molly noticed few young people were using the decades-old slide – and wrote to Carterton Mayor Greg Lang to ask if it could be upgraded.

Encouraged by Mayor Lang, the then St Mary’s School pupil made a submission to Carterton District Council’s Ten-Year Plan.

The council agreed to contribute $10,000 towards a new slide – with the balance to be sourced by the community.

With support from Carterton youth organisation Rangatahi to Rangatira, Molly set up a Givealittle page to raise the remaining $20,000.

The page went live week and, as at Monday morning, has raised over $1100.

Mum Amanda O’Dwyer said they weren’t expecting to hear anything from the council when Molly first contacted Mayor Lang – but the project has since “snowballed”, and Molly is more determined than ever to see it through.

“She’s been the squeaky wheel that gets the grease – she made her voice heard, and things are happening,” Amanda said.

“She wrote to the council a year ago, and she’s still got the drive and the motivation to push on with her goal.

“We hope this will inspire young people to be brave and speak up for what they want to see in their communities.

“Her Dad and I are very proud.”

Molly, soon to start at Chanel College, says her family often visits the pool complex – one of the only free public pools left in the country.

She noticed the slide had several safety issues: its enclosed space was cramped and restrictive, its ridges can “hurt your back”, and people going down head-first could “slam [their] head into the water.”

“Plus, it’s really old – some of my Mum’s friends told me they used it when they were my age,” Molly said.

To help her “keep busy” during the school holidays, Amanda suggested she contact the council – and Molly received a letter in the mail shortly afterwards.

“That was awesome – I’ve still got Greg Lang’s letter up on my pinboard!”

Lang sent Molly’s request for consideration under the Ten-Year Plan, and Deputy Mayor Rebecca Vergunst got in touch to help guide her through the submission process.

Vergunst, passionate about involving young people in local democracy, said she wanted to make sure Molly’s experience with the council “was a good one”.

“Not a lot of young people understand what council does or how [communities] can influence change,” Vergunst said.

“And unfortunately, councils have the reputation of being slow and hard to deal with – but it doesn’t need to be like that.

“When I saw Molly’s letter, I wanted to encourage her initiative and make sure she felt comfortable.

“All it takes is one motivated person to kick something off in a community – imagine if all people learned that at a young age.”

For her submission, Molly created a petition, signed by her peers, teachers and family, and gave a presentation to the mayor and councillors.

In her presentation, emphasised the importance of safe and “enjoyable” facilities for Carterton’s growing population.

“Doing my speech was a bit nerve-wracking at first,” Molly said.

“But the councillors were really nice and kind to me, which helped me feel less nervous.”

The council has since been able to source a bespoke slide, meeting health and safety specifications, from a company in Whanganui.

Deputy Mayor Vergunst continued to work with Molly on her fundraising plans, and R2R has come on board as the fund holder for the project.

Davidson said R2R will look at other fundraising opportunities for the slide – including incorporating an auction into its own fundraiser quiz night in March.

“We’ve got a bit of work to do – but we’re hoping the slide can be installed for next summer,” Amanda said.

“Hopefully, Molly won’t be too tall to use it!”

To donate towards the slide, go to https://givealittle.co.nz/cause/mollysslide.