Moth plant on the loose in Wairarapa It’s not quite a triffid, but a noxious, wildlife-killing weed is on the loose in Wairarapa.

Greater Wellington Regional Councilhas notified residents about the presence of an invasive species called moth plant that was on the rise.

Featherston was reportedly one of the hotspots for the noxious plant, which was also known as ‘cruel vine’ for its propensity to strangle and suffocate trees, and kill insects. 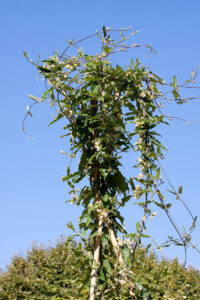 A moth plant winding up and around a structure. PHOTO/WIKIPEDIA

Moth plant was a rampant, evergreen vine that grew up to eight metres tall, with pungent, milky sap, and twining stems covered in down.

Clusters of up to four bell-shaped cream flowers, 20 to 25 millimetres in diameter, occasionally with pink streaks, appeared from December to May, followed by the distinctive pear-shaped pods, up to 10 centimetres in diameter. These contained kapok-like pulp, which split open to disperse black seeds.

A regional council spokesperson said the plant was becoming a problem in Wairarapa and had a negative effect on wildlife and biodiversity.

“This fast growing pest plant is spread through the wind and forms large masses that smother vegetation.

“Sometimes called ‘cruel vine’, it can also trap and kill moths and butterflies in its flowers.

“We have seen other pest plants, such as old man’s beard, become widespread in the Wellington region, and the moth plant has the potential to be just as destructive.”

While there have been several instances in Featherston, it is still in relatively low numbers across Wairarapa, but residents were asked to stay on the lookout for the distinctive plant.