More than exercise: Getting on the CrossFit bandwagon For some, CrossFit seems like an exclusive fitness fraternity. But in reality, people of all ages and physical abilities are taking part in the sport around the world. Reporter HAYLEY GASTMEIER sets her alarm, puts on her activewear, and gets a taste of the action.

Wheelchair-bound Stephanie Hammerman is an inspiration.

Living with cerebral palsy, the 28-year-old American is an athlete, CrossFit trainer and motivational speaker.

When she was born, doctors told her parents she would never read, speak, or write.

“I am pretty sure I have proven them wrong,” she says, quoted in a magazine.

Four years after Stephanie’s CrossFit journey began, she was diagnosed with cancer – stage-three Hodgkin’s lymphoma – in 2016.

“I remember walking into the doctor’s office and she said she had never met anyone like me before,” Stephanie explains in a 2017 Facebook video.

“I had cerebral palsy, obviously, but I was fit.

“So there’s nothing negative that I can say about CrossFit, it literally saved my life and I am forever grateful for that.”

CrossFit is lifechanging — that’s what people were telling me.

But to say I nailed my first CrossFit workout would be a lie.

Within 20 minutes I was lightheaded, one step away from throwing up and passing out, and I was forced to sit out until what felt like the mother of all hangovers passed.

At 32, aside from the odd jog, my first 6am class with Martinborough’s Facing Giants CrossFit was the most intense physical workout I’ve ever done in my life.

After a dozen clean and jerks (a move where you lift a barbell weight above your head — in my case, plyboard ‘weights’), I had used up my glucose reserves (having only coffee in my system), and coach Matt Guild was obliged to give me a pouch of organic baby food to get me through.

Husband and wife team Matt and Lydia opened their White Rock Rd CrossFit gym in 2014 and they have a loyal following of people aged under 20 to over 60, who they describe as their “CrossFit family”.

The couple begin our interview on an inspiring note by showing me online videos of amputees and people with other physical impairments doing sporting moves that blew my mind.

CrossFit is a fitness program that focuses on “constantly varied, high-intensity, functional movement”. 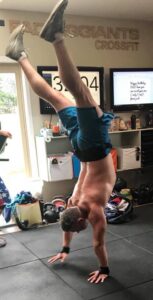 Athletes train across a combination of fields, including gymnastics, Olympic-style weightlifting, body weight exercises, indoor rowing, aerobic exercise, and running, among others.

CrossFit was founded in 2000 by Greg and Lauren Glassman in California.

Matt, 45, a former body builder, was introduced to the sport five years ago by a friend doing handstand push-ups.

“It was crazy . . . I started wanting to know more and enjoyed being challenged by movement.

“I’m not getting any younger and the idea of being strong and being able to do almost anything, from handstand walking through to putting 100kg over your head, that’s the reality of it and it’s crazy to think you can do that.

“Now, I’m stronger, fitter and more capable than I was in my 20s, and I was fairly physical and active then.”

Enthusiastic after beginning CrossFit, Matt decided to open a gym where he could teach people to get the most out of their bodies.

“I grew a passion to want to help people move and function better in everyday life.”

A shoulder injury in Lydia’s 20s limited her ability to play certain sports.

Since beginning CrossFit the issues it once presented have dissolved, and she can now lift 63kg above her head.

She says CrossFit has improved her endurance levels and has taken her running to the next level.

It also plays a key part in her job as an occupational therapist.

The couple, who have two children, Josh (12) and Isabelle (10), say nutrition is key if you want to perform well physically.

“You wouldn’t put crappy fuel in your car and expect it to run well.”

CrossFit is for absolutely anyone, and any age.

“As long as you’re willing to work, put the effort in, it will take you places that you’ve never dreamed,” Matt says.

Lydia says people all over the world are discovering the benefits.

“YouTube is filled with inspiring videos of really unwell people who just start, progress, get off their meds, and function amazingly.”

Everyone in a CrossFit session does the same workout, but movements are scaled to suit each individual’s ability.

If you can’t do a pullup, you’ll do a movement which targets the same muscles and increases strength.

The close-knit nature of Facing Giants makes for a safe environment, with a good trainer-to-client ratio.

Matt says after six months of CrossFit “you’ll be amazed” at the results.

The sport has the potential to improve the quality of your life.

“One of the transformations I’ve noticed [in others] is confidence,” Lydia says.

“Just seeing how people are standing up strong and holding themselves and communicating more confidently, that’s really cool.”

It’s an energising start to the day

While most people are still snuggled up in bed, Trish Higginson is breaking personal bests. 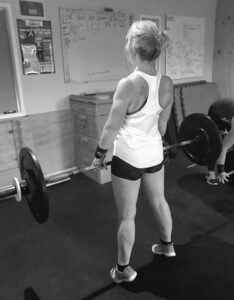 At 55, the Greytown nurse says she’s never been so fit in her life.

“The great thing about CrossFit is even though it’s hard training, you achieve beyond your goals.”

This was hugely down to the “encouragement and support” of other teammates and, of course, Matt and Lydia.

“You push yourself up to and beyond your limits and it makes you feel super strong, both mentally and physically.

“It’s more than exercise, very much a lifestyle.”

Trish gradually worked her way up to training five times a week at 6am.

“It’s such an energising start to the day.”

She says the positivity and benefits of the sport has enriched all other elements of her life.

Her mental health, and overall general wellbeing has improved — and weigh loss is a bonus.

“I think it’s really beneficial for anyone, but particularly for people in their 50s and 60s.

“But our bodies are capable of being fit and functional at any age.

“I’ve gained so much confidence, I’m much fitter, I’m the right weight for my height for the first time in many years, and I have learnt a lot about being disciplined about nutrition.

“I’m feeling a lot more mentally strong and the comradery that comes with [CrossFit] is awesome, it’s very much a family.”