Seth Rance is hoping he has done enough on the short tour of Sri Lanka to stay in selection contention for the home Twenty20 series against England in November.

The medium pacer had a slow start to the three-match series which New Zealand won 2-1. 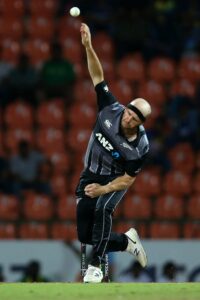 Rance gave up 58 runs off four overs, including 23 off the last over in the first match which the Black Caps went on to win by five wickets.

Rance showed his class in the second game, with 3-33, including the key wicket of Niroshan Dickwella, lbw [39 off 30 balls] just as Dickwella was looking to increase the run rate.

Rance bowled tidily in the third game, conceding 29 runs off three overs. He also had his only bat of the series, being the last man out, lbw for eight.

Sri Lankan veteran Lasith Malinga dominated the match with a double hat-trick as the Black Caps lost by 37 runs.

“The first game didn’t go that well. They targeted me and I went for a few runs,” Rance said on Tuesday.

“The guys who had played in the World Cup had a lot of cricket, but the rest of us had only one training session at Lincoln [High Performance Centre], and that didn’t help our causes.

“I was a bit more acclimatised in the second game, but it was still tough over there, with 20,000 fans packed into the ground and 30-degree [Celsius] temperatures and high humidity.

“I found my length a bit better in that game. In T20 you need a bit of luck and a couple of catches stuck, and to get Dickwella when he was threatening probably saved us quite a few runs and was very satisfying.”

It had been great to play some more games for New Zealand said Rance who has now played eight T20 internationals.

The 32-year-old was hoping to have done enough to be picked for the five-game T20 series against England.

“The feedback has been good on the back of a New Zealand winter and only one-and-a-half day’s training.

“I should be there or thereabouts again.”

Rance’s long-term aim is to make the New Zealand team for the T20 World Cup in Australia in October-November next year.

In the meantime, he will prepare for the Central Stags’ domestic season, which starts with the Plunket Shield first class programme in late October.

Rance is uncertain what impact staying home in Greytown this winter rather than playing league cricket in England would have on his season.

“It’s too early to tell at this stage, but it was important to give the body a rest.”

Rance didn’t believe there was any hangover from the disappointment of finishing runners-up in controversial circumstances at the Cricket World Cup.

“The guys play so much cricket these days.

“They went straight from the IPL to the World Cup, were home for only a few days and then were off to Sri Lanka, some were off to the Caribbean League, and then straight into our New Zealand season.

“A lot of them are playing cricket nearly all the time.”