Million dollar question: How much is each school getting? The government’s announcement that state schools will receive millions in extra funding has gone down like a lump of coal at Christmas for many state-integrated schools who won’t receive a cent of the boost.

Amounts schools were chosen to receive was based on their roll.

Wairarapa College, the largest school in the region, was the only school to be selected to receive the maximum amount of $400,000. 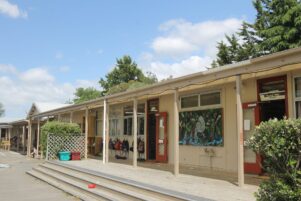 Fernridge School principal Janine Devenport said two-thirds of the school was old un-insulated prefabs, the toilets inside of which were old and in desperate need of upgrading.

“[The capital injection] means that the rest of our school can be upgraded to be on a par with the new building,” Devenport said.

Makoura College principal Paul Green said the school would have “no trouble at all finding suitable projects” to spend its $185,724 on.

“Much of our regular ministry property income gets channelled into essential infrastructure demands like drainage or roofing, so this will enable us to have a bit of discretion to deal with wishlist things, like upgrading our guidance and nurse support spaces.”

Principal Gareth Sinton said the school had won a national award for its learning spaces, and the money would go into infrastructure improvements.

“Expansion of our solar capacity is already happening, we have been a solar powered school for over a decade, so we can look at replacing our current heat pumps with new energy efficient models and completing the switch to LED lighting for the last part of the school.”

While Solway School principal Mark Bridges welcomed the funding, it was his understanding that Solway was unlikely to receive an increase due to the fact its building projects were directly managed by the Ministry of Education’s property team. 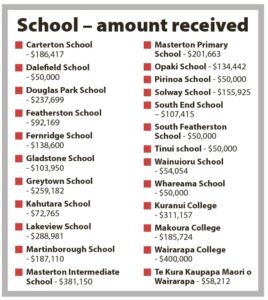 Ponatahi Christian School principal Peter Bertram said legal action from the Association of Proprietors of Integrated Schools may be pending.

“We try to run on a low budget so that all families, from all economic backgrounds, can afford to send their children.

“Our parents pay taxes like all other parents in New Zealand and are entitled to a share of this.

“And like all other schools in New Zealand, we also have building needs.”

Trinity Schools Trust Board [proprietors for Hadlow, Rathkeale, and St Matthew’s] chief executive Rob Blackett said they would welcome the inclusion of state-integrated schools in the initiative.

“Improvements to lighting, acoustics, technology, ventilation, and temperature control would enhance student learning and enable them to achieve their best self in the classroom.”

Blackett and Bertram passed on a press release from the chief executive of the Association of Proprietors of Integrated Schools chief executive, Paul Ferris.

Under the legal agreements covering integrated schools, the government is required to pay for their maintenance on the same basis as state schools, once a school’s proprietor has upgraded it to the same standard as state schools, according to the press release.

Ferris said he assumed the government had made a mistake when there was no mention of integrated schools in the weekend announcement.

“Is this a bias or an oversight?

“This is a government that highlights its desire to lower costs of education to parents in state and state-integrated schools.

“Integrated schools will explore all their options, including their legal rights.”