Some images from a Men’s Group gathering [identities anonymous, photos approved by the group]. PHOTOS/SUPPLIED

Mental health among males has become a prominent issue. As attitudes around masculinity have changed, more focus has been placed on the unhealthy behaviours that have been ingrained in the male psyche for centuries.

Being tough, competitive, stoic, and not showing weakness have all been staples of manhood in the West, but these come saddled with a lack of true and open expression.

There are many sayings that centre around this idea; ‘having a stiff upper lip’, ‘manning up’, ‘growing balls’, etc. But what they lead to is a form of denial – if a man is sad or anxious he has traditionally been taught to cover this up, and to withhold it from himself and others. This has led to deteriorating mental health and extreme insecurity.

Logic tells us that force and pressure applied to a static object eventually results in a breaking point, and it is no different with the mind. This is why it’s important for men to come together, to learn how to release their worries and troubles out into the world, and to discuss them in the presence of other men – without ‘self-medicating’ [usually alcoholism], and without any degree of denial, which can lead to internal or external violence.

This was why Jonáš Koukl established the Wairarapa Men’s Group, which allows men to talk in an open, non-judgmental environment, and to learn that conversation can help, particularly among fellow men.

You might remember Koukl from last week’s Midweek, where we discussed his music workshops. This time, though, the focus is the group itself, and the diversity of its membership. So far, it has been a great success and there has already been interest in a Women’s Group forming. 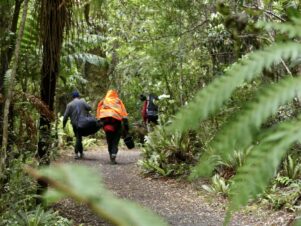 The group is free to join and meets monthly at indoor community spaces, but also heads off into the bush for a night-long campfire, once a month. The men who attend are of all ages, mainly from Wairarapa, but the group has occasionally hosted participants from Wellington, Kapiti, Manawatu, Hawke’s Bay, Auckland, Australia, Europe, China, and the USA.

Men’s group meetings are voluntarily based on koha, and all is confidential. Participants range from 14 years old, with the oldest over 80.

“There is no pressure – it is totally okay to be passive and just listen, but usually the honest sharing is so powerful and contagious that everyone opens and shares their own stories of struggles or joy.”

All the participants are encouraged to co-create the meeting and some of the regular participants are already taking the role of leaders, or are being supported and mentored by more experienced ones. This approach keeps it grounded, variable, and extremely empowering for many.

One anonymous member said he had “personally benefited” from attending the group.

“It was a big step for me to go out on a work night and get away from my office. It has been well worth it. Thanks to the group I have been associating with one of the members and including him in my regular Sunday walks on the mountain.” Partners of the group’s attendees have also seen the differences from having a space for conversation, talking, korero, or any of the terms that refer to communication. One member’s partner noticed the positive change in her husband after he went to some of the groups.

“Now that my husband has a confidential place where he can share his heart and hold that space for others, he’s a better father and partner.”

The group has appreciated the support from Ka Pai Carterton, who are helping them with the group expenses and applying for future community grants.