Ken Wilton showing his wife’s lifejacket from the Wahine in a 1998 photo. PHOTO/WAIRARAPA ARCHIVE

Fifty years on, the horror of the day the Wahine sank on April 10, 1968, is still raw for Masterton woman Diane Wilton who escaped the wreck in the last life boat, HAYLEY GASTMEIER reports.

Diane Wilton is one of the lucky ones. She survived the Wahine disaster.
At the time, she was 27, and a newlywed.
She and her husband, Ken, lived in Christchurch, and were heading to Masterton to spend the Easter of 1968 with family.
They boarded the Wahine in Lyttelton.
“It was a clear bright night, and the boat was just gorgeous, it was gleaming white and fairly new — it was the star of the fleet really.
“The stars were out, there was no wind. It was just beautiful in Lyttelton.
“You wouldn’t have had a clue that anything like what happened was ahead.”
On the journey, just before 6am on April 10, the ship turned towards Wellington harbour.
“But the storm had struck in the Cook Straight.
“The captain thought it was still okay to go in through the heads. What he didn’t know was Cyclone Giselle had come in from Auckland, and the two [storms] met head on.
“Ken had gone up on deck to see the boat come through the heads, and he was astounded at the fury of the storm.
“He was talking to a crewman at the actual moment when the boat was lifted by a gigantic freak wave, which hurled it into Barrett Reef.”
Diane was in the shower, and assumed the commotion was the ship docking.
“I quickly dressed, then it came over the tannoy that we had gone aground on Barrett Reef, ‘grab your lifejackets and go to your muster stations’.
“Ours was the lounge deck, which was a long way up. We had to go round and round staircases, up various decks, until we got to the top deck.
“To this day, I can’t bear to go below deck.”
Diane said everyone remained calm. No one was aware of the imminent danger – that 51 lives would be lost that day.
“We were just told the boat was drifting up the harbour. That’s what we were told for seven hours really.”
She and Ken sat by the window, watching the ocean pound the ship, while catching glimpses of the tug boat, Tapuhi, making several failed attempts at securing a line to the Wahine.
They watched as the children in a family of five napped, using their adult-sized lifejackets as pillows. 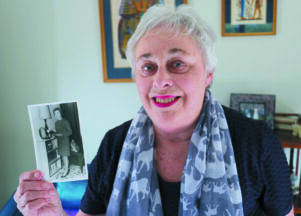 Wahine survivor Diane Wilton, with a photograph of her wearing her favourite wool dress, which was retrieved from the wreckage and restored after 20 dry-cleans. PHOTO/HAYLEY GASTMEIER

Diane recalls there were no small lifejackets for children, meaning many lost their lives, slipping through the oversized ones in the water.
Just after 1pm, the ship “suddenly listed to the left”, breaking the heaving lounge furniture free from the bolts securing it to the floor.
“I was by the window and all the furniture came down to where I was, and I was trapped underneath it.”
Diane said it was chilling to then hear “abandon ship, abandon ship immediately” over the tannoy.
“I didn’t have much hope.”
Ken helped passengers out onto the deck to the lifeboats, while Diane battled up the slope, through the furniture.
By the time she reached her husband, the pair were two of few remaining on the ship.
“When we stepped out the door, all fury broke loose – it was terrible,” she said. “When you stepped outside, you went straight down on the deck, just slid, and that’s when many people broke legs and slipped into the sea.”
The couple slid down the deck and managed to grab onto the rails.
Diane looked across to a lifeboat on the water. A tug travelled towards it as a huge wave approached.
“The tug came up on the wave and came down on top of the boat. The boat turned over, and that was the one that had a lot of women and children in it . . . a lot of them would’ve died, including one of my mother’s friends, but I didn’t know that at the time.”
The experience was terrifying. She remembers the wind howling like a “banshee wailing in Ireland”, and being lashed with rain.
“It was really awful.”
There was one lifeboat left, which could not be released because of a faulty mechanism. A crewman jumped into it and began hacking at one of the ropes securing it to the Wahine.
“Meanwhile, Ken was telling me to get in, and I said, ‘I’m not getting in without you’ . . . [eventually] we got in and he went to get the other hatchet at the opposite end. Ken watched the crewman and cut the rope in sequence.
“The lifeboat dropped but it dropped right by the Wahine. The smokestack was above us and we were worried we’d get sucked under.”
Ken and the crewman worked hard manoeuvring the boat away from the ship. The drift was forcing everyone towards Eastbourne, and Diane remembers the relief she felt the moment she saw the approaching Ho Ho fishing boat, which towed them to safety at Seatoun around 4pm.
“We picked up lot of people in the boat from the sea, and we saw some awful tragedies . . . you’d see them in the water and then, all of a sudden, a wave would take our boat up and when we came down again they weren’t there anymore.
“It was a very hard job to pull heavy, wet, drenched people on board, but I think we got about 20 on board so that was good.”
Ken, an accountant and a keen fisherman, secured his wife’s lifejacket so well that she was forced to continue wearing it well after they had been rescued. They boarded a bus that took them to the Wellington railway station, where a crowd waited, hoping their loved ones were among the survivors. The couple were met by Ken’s best man, Jeff Thomas.
“They whisked us away to Jeff’s house and they put me in a bath with a big glass of brandy — I’d never had a brandy in my life.”
Diane said the event was “a freak of nature”, and, personally, she never blamed the captain.
That same year, she and Ken moved to Masterton, where they still live.
They went on to have three children. Over the years, Diane has given her account of the event so many times, speaking at schools, clubs, and to Kiwi and international media outfits.
“Eventually, I stopped having nightmares, but every time I talk about it, it all comes back again.”
After the Wahine disaster, she treated every day as a blessing, she said.
And she’s never forgotten the rescuers who risked their own lives to save others.