John McLaren lines up a shot during his championship win. PHOTO/SUPPLIED

McLaren held on to win on aggregate score over the three ranges of 800, 900, and 1000 yards in tricky windy conditions at Upper Hutt’s Trentham range last Thursday.

The 73-year-old won by one point from Hamilton’s Ross Geange, a three-time winner [1995, 1997, and 2015] of the Ballinger Belt, New Zealand’s oldest sporting trophy, a former resident of Featherston, and the winner of the 1997 Wairarapa Times-Age Sports Personality of the Year.

Geange also represented the country at the 1994 Commonwealth Games.

New Zealand international Amy Hatcher had a chance to win, needing a bullseye with the last of her 10 shots over 1000 yards but was off target.

“Amy was leading after the first range [800 yards] but I came good over the last range [1000 yards], and she scored only one point when she needed a bull off her final shot and finished in third place,” McLaren said.

McLaren was rapt with the result in the tough conditions that Trentham range is famous for.

“There were warm, dry, fishtailing norwest winds that made for a tricky day’s shooting.”

McLaren first won the championship at the Papawai range in Greytown while studying at Massey University in 1971. In the past decade, he was also victorious in 2015 and 2018.

Last week’s win came after some good form over the past year, which included a third in the Haddon Donald Trophy at the national championships at Trentham in January, and a victory at the famed Bisley range in England. 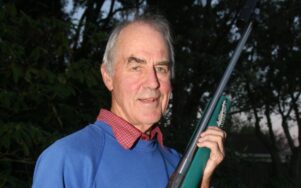 McLaren said the Wairarapa Open will return to the region in 2021, with a new shooting range being built near Wainuioru to host the event.

“It’s at the end of Longridge Road, about a mile from our old range and we’ve turned it 180 degrees so that the sun will be behind us. There will be ranges from 300 yards to 1000 yards and we’ll probably build a clubhouse.”

McLaren said the new range is the 80th to be built in Wairarapa.

“In the early days, each area needed their own local defences, so the ranges were used for training.

“There was a shooting range at Lansdowne House and they would shoot into the hill where Manuka Street is.

At the Solway Showgrounds in the 1870s, they would shoot into the bank below where Solway College is now, and there was a 2000-yard range behind the old Gladstone Store [now Greg Lang’s Wheelwright Shop].”

McLaren said the early Wairarapa Open championships were held at Papawai and the four days were not only competitive but social as well.

“The Masterton shooters would all get in their army uniforms so they could travel to Greytown on the train for free.

“They would march through Greytown to Papawai, practise and shoot for a couple of days, and then get on the booze.

“Then they’d get back in uniform, march back through Greytown and travel back to Masterton on train.”

Shooting has also progressed from the old manual recording of shots and the new range will incorporate the latest technology.

“It’s all electronic targets and done by wi-fi. So, you fire a shot, it’s recorded instantly, and you can look down at your iPhone or iPad to see where you hit.”

McLaren has had more than 40 years involvement in shooting and in 2014 was presented the Lifetime Achievement award at the region’s sports awards.