Percy Fisher’s achievement is acknowledged with a commemorative plaque and a half-size model of his monoplane, located on Gladstone Rd near Carterton. PHOTO/JADE CVETKOV Dr John G Hill in his shed with the plane’s fuselage [main body] holding one of the turnbuckles. PHOTO/FILE

But Masterton’s Dr John Hill, a retired engineer, is persevering, despite some challenges.

The plane , piloted by Reggie White, managed about 800 metres of controlled sustained flight, with a take-off distance of about 27 metres.

It travelled at more than 60kmh when airborne.

A three-minute compilation was captured by filmmaker, Charlie Barton, and as fate would have it, he worked with Lee Hill, John’s father.

Fascinated by flying as a youngster, and having worked in the aeronautics industry, John became interested in replicating the monoplane built by Percy Fisher.

A lack of drawings made the project a real challenge, but with his background and experience in building planes, and the photographs available, Hill has been able to spend the past two years, faithfully recreating the full-size original in his Masterton shed.

A shortage of expensive turnbuckles which help to maintain the rigidity of the plane, has halted the project, while he seeks the funds to finish it, and fellow Wairarapa Aero Club member and engineer Kevin Ormond has generously helped, and also set up a Givealittle page to raise money.

“Wairarapa was almost the birthplace in some ways for aviation – not forgetting Richard Pearse’s contribution – and when I saw John’s blueprints I was in awe of his incredible talent, and because of my passion for aviation, I wanted to help in some way.”

Percy Fisher’s granddaughter in Britain, donated $1000 towards 20 turnbuckles – and many other businesses have also assisted him with various items that he required – but he still needs at least another 36 of these vital components, which generally cost about $60 each new, and the project has about six months to go before it can be completed.

Tom Williams, president of Wairarapa Flying Tigers Incorporated, has donated an old American hay baler engine to use in the monoplane. 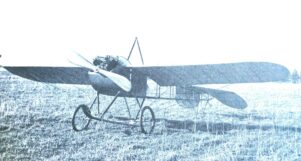 The original monoplane Hill is attempting to replicate. PHOTO/SUPPLIED

“Anyone honouring such a historic aircraft deserves all the support they can get, it’s a fantastic initiative.”

Although the plane is just a replica and will not take to the skies – as it will not be approved for flying – it is in itself a feat of enthusiasm and technical know-how.

Hill hopes to donate the finished project to the proposed aviation centre at Hood Aerodrome.

Fisher’s achievement is acknowledged with a commemorative plaque and a half-size model of his monoplane, located on Gladstone Rd near Carterton.

If you want to support this project, visit the Givealittle webpage ‘Percy Fisher Monoplane Replica Project’ or for progress updates, visit the Facebook page with the same name.