Warren Maxwell says the younger generation is paving the way for progress in the use of te reo Māori. PHOTO/FILE

Award-winning musician and passionate student of te reo Māori Warren Maxwell is optimistic about the future of the language.

Although the Trinity Roots vocalist had a late start to te reo, he was making up for lost time, often spending nights researching the language, as well as his whakapapa [genealogy].

Now, Maxwell was at a point where he wanted to share his passion with others.

Earlier this year, he posted a message on a Featherston Facebook page to gauge the community’s interest in a regular catchup to practise te reo Māori.

“It was just a casual get-together for anyone in Featherston or the surrounding area who wanted to practise their reo Māori.”

The original idea was to host the catchups in a different Featherston cafe each week.

“I liked the idea that other members of the public might hear te reo being spoken in a cafe, and it becomes normalised,” Maxwell said.

With many people from Featherston and the neighbouring towns of Martinborough and Greytown registering their interest, Maxwell decided to pivot to the larger venue of the Featherston Golf Club.

The group got three months of Sunday sessions in before the Delta variant of covid-19 struck New Zealand.

While the lockdown had forced a halt to the catchups, Maxwell said they would likely make a return in time for summer.

Maxwell said he had initiated the sessions once he reached a point in his own learning where he felt comfortable making basic conversation.

He studied intermediate-level classes at UCOL Wairarapa once a week but felt that he and other learners needed more time to put the lessons into practice without fear of making mistakes.

“I think one of the biggest challenges is that people are whakamā [embarrassed] to try to use te reo Māori because they think they might be pronouncing things the wrong way or using the wrong sentence structure … that’s something that we want to mitigate. 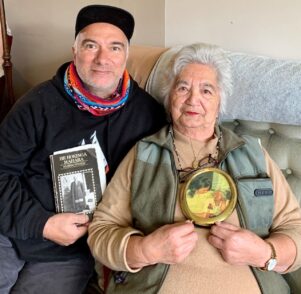 Although te reo Māori was the first language of Maxwell’s mother, he had been more in tune with his Scottish side for much of his life.

When his mother was growing up in Ruatāhuna in the 1940s and 50s, use of te reo was not only discouraged but punished.

“She got strapped for speaking te reo Māori at school.”

Maxwell said attitudes towards the language had changed a lot since then and attributed its current state to the kaumātua [elders] who had established the Māori Language Commission in 1987.

“Since then, slowly, we’ve been getting our language back … now we’re seeing the fruits of that.”

He pointed to the successes of kohanga reo and kura kaupapa Māori but said the breakthrough of te reo into popular songs was another triumph for the language.

One of the most prominent examples came from pop artist Lorde, who has released an EP of songs from her album Solar Power translated into te reo Māori.

“There are all sorts of perspectives on that, but I really celebrate her for what she has done, and many others are doing as well,” Maxwell said, citing Drax Project, Six60, and Maisey Rika as other examples of NZ musicians using te reo in creative ways.

“I’m a born optimist. I feel like the younger generation coming through thinks that we should be celebrating te reo Māori, Pasifika cultures, and all cultures … It’s not binary – it’s colourful.”