Reserve named after Norman Kirk in 1975

Situated in the heart of Solway, at the end of Jellicoe Place, is a quiet reserve named after a former prime minister that one community group wants people to see, Eli Hill reports.

But on Friday the Solway Neighbourhood Planning Group unveiled signs placed at its entrance ways that are designed to welcome people in, and pique curiosity.

The sign reveal was attended by 15 people, including the artist responsible – Katie Gracie, as well as members of the Solway Neighbourhood Planning Group, Masterton District councillors, and Mayor Lyn Patterson. 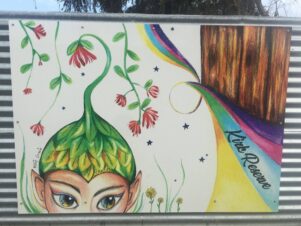 The new signs for the Kirk Reserve were put at the reserve’s two entrances.

The signs featured a fairy and native mistletoe, which artist Katie Gracie said would help capture people’s imagination and draw them in.

“When I spoke to Rowena I didn’t know the reserve existed so I came here and the boys were playing, and she mentioned more than once about fairies and elves, there’s trees and no playground equipment, they’re using their imagination, so I thought, ‘oh I’ll play on that’.

“The other thing I’d never seen before is the New Zealand mistletoe, and I liked the fact it cohabitated with the trees.”

“The idea came from our Solway group – we want to make Solway a good place to have fun, that’s one of our goals, and we knew this reserve was a lovely spot, but not many people know they can come in because of the two alleyways.

“When we had a community event here we had mock-ups of these sign to bring people in and people were so delighted, so we really want to build on that, people are keen to find spaces in their neighbourhood they can walk to and just have a bit of fun, and the signs are just made to invite people in and spark a bit of imagination.”

Stauber said the biggest draw of the reserve was the trees. 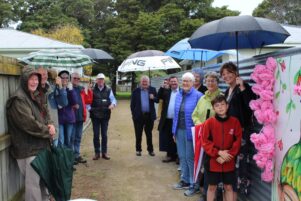 The crowd gathered for the unveiling included councillors, and members of the Solway Neighbourhood Planning Group.

“Whenever the children come in they just run or they climb a tree.”

The land was set aside as a reserve by the Masterton Borough Council when the area was subdivided in the late 1950s, but it was neither named nor fenced until 1975.

At a meeting in February 1975 the borough council decided to name the reserve in honour of the late Prime Minister, Norman Kirk.

Kirk was a working-class politician, who had become the youngest mayor in the country in 1953, when he won the Kaiapoi mayoralty at the age of 30.

In 1957 he became the Labour member for Lyttelton, and in 1965 became leader of the opposition, remaining so until the 1972 election, when he became prime minister.

His government was a reforming one, withdrawing New Zealand troops from Vietnam, sending frigates to Mururoa Atoll to protest against nuclear testing in the Pacific, and refusing to allow the South African rugby team to visit New Zealand because of apartheid policies. By mid-1974 it was clear he was unwell, and on August 31 he died in Wellington.

There was widespread dismay at his passing, and a large funeral was held in Wellington. Maori leaders proclaimed “Kua hinga te totara i Te Waonui a Tane”, A totara has fallen in the great forest of Tane, a whakatauki to express grief at the passing of a great chief.

As well as naming the reserve after Norman Kirk, Masterton Borough Council planted some totara trees, to symbolise the replenishment of greatness.

An unusual feature of the reserve is that some of the trees have become hosts for rare and endangered native mistletoe.

“This is the community coming together and sharing ideas and making things happen for them and their neighbourhood.

“Green spaces are important, they’re so peaceful, it’s surrounded by houses and it’s a nice place for people to come, sit, to have a picnic, for the kids to run around. It’s a great space.”