The Masterton Variety Club, which has changed its name from the Masterton Savage Club, has announced its first, and last, variety act of the year – a music hall skit, followed by a variety show of people performing their talents, and then a sumptuous afternoon tea, accompanied by piano music in the dining room.

The Masterton branch started in 1910 and since then has performed up to 12 times a year. The first Savage Club in the country was in Dunedin, founded in 1888. Masterton’s peak membership was in the 1950s.

It was capped at 100, with a long waiting list, which led to another type of club being formed, Orphans Clubs, for those who couldn’t get into Savage Clubs.

The group photo of Poneke and Hamua Savage Clubs meeting in 1925.

The clubs would regularly host and visit other variety groups across the country, in what were known as ‘raids’ — these would involve a great deal of ceremony and the exchange of gifts between the two groups.

Savage Clubs were a social institution in New Zealand during the 20th century, but have slowly petered out with an ageing membership.

Savage Clubs take their origin in Richard Savage, who named a club in London in 1857. The clubs would later develop all over British overseas territories.

In New Zealand, they served as a place for men to perform for one another – usually comedy acts, drama skits, and musical numbers – as they drank and smoked, chatting away the evening. 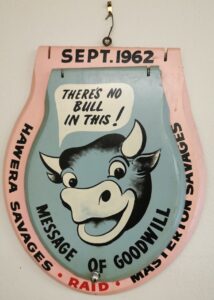 Women were allowed to join much later, in 1998, with the president and pianist, Doreen Wakefield, being one of them. Wakefield is the musical director of the upcoming performance and will provide piano accompaniment .

“We’re down to about a dozen members now,” Wakefield said. “About 14 of us are probably active.”

Because of the new name [Masterton Variety Club], everything will now need to be changed, right down to the embroidered curtains that hang on their Albert St stage. The proceeds from the show will hopefully go towards this.

Wakefield said the purpose of Savage Clubs was to band together and entertain one another, but that these were traditionally private events.

“It was to come together, to put a concert on. And it was never put out into the public arena, because they’d have a hundred or more members, so it would just be for the members of the club.”

This has all changed now, and the Masterton Variety Club are now inviting people in to see what they’ve been working on for so long.

“We open up with the ‘old time music hall’ [a stage set], where each person comes on, dressed in all their finery, and sings a song, and then the audience has to sing the chorus again,” Wakefield said.

“That’s the first half, the second half we go into separate items; we have singers, we do sketches – some naughty, some not so naughty – we have jokes, poems, a choir.” 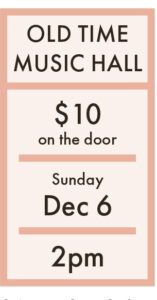 Ian Palmer, programme organiser, who has been with the club for over 30 years, said they practised every Friday.

Wakefield said the group was looking to “move away from the Savage Club identity”.

“People either don’t know who the Savage Club is, or if they do, they regard us as a bunch of oldies who go down there and sing songs.”

Palmer and Wakefield both spoke fondly of a member who had passed away recently, Roy Merriman.

“He had a lovely, lovely voice,” Palmer said. “Yes, he was a real Bing Crosby,” Wakefield said, who also, like Palmer, highlighted the work ethic of all members.

“We work hard, we work really, really hard.” For a group of people in their 80s and 90s, the fact that they practice weekly is testament to their admirable tenacity and drive to performant their best.

On the day, Wakefield will have her piano playing accompanied by Wairarapa double bassist Miles Reay.

“And we get everybody going, I tell you!”