Masterton paddler wants to get to world champs Jeff Fry is off to the Waka Ama World Sprint Championships in August. PHOTO/EMILY NORMAN

A Masterton paddler is looking for support to get to England in August for the waka ama clubs world sprint championships.

Jeff Fry is in the Whanganui-based Tipi Haere six-man team, who will contest the Golden Masters [60-69 years] at the championships to be held on Dorney Lake, Buckinghamshire.

The 63-year-old has been paddling for eight years, first for the Wairarapa Dragon Boat Club, before transitioning into waka ama. Because there was no team for him to slot into in Wairarapa, Fry joined Ratana Paa Kaihoe Trust Waka Ama and the Tipi Haere team. 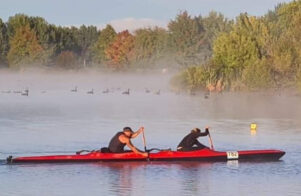 Jeff Fry, at rear, works out on Henley Lake. PHOTO/SUPPLIED

Although he still competes in dragon boating for Wairarapa, waka ama has taken precedence in recent months.

Fry works in the middle of the six-man crew, who qualified for the world championships through the regional championships. He travels to Whanganui every week for training, as well as travelling to competitions.

However, the cost of the regular travel and getting to England is very high, and Fry is hoping to get some sponsorship from businesses to help with costs.

“I’ve been doing this for eight years now, and we’ve got through. This will be one of the biggest things I’ve actually ever done, but it’s a huge expense,” Fry said.

“I’ve put out something on Facebook for family and friends and got a little bit that way, but of course, with times being hard, it’s pretty tough, so I’m looking at local businesses that may have a little bit more to give to make it a bit easier.”

Fry intends to approach businesses he deals with over the next two to three weeks but would welcome any support from other companies.

In the meantime, Fry is continuing his build-up for the world championships, with gym work, jogging, and training on Henley Lake, as well as the regular sessions with Tipi Haere on the Whanganui River.

More than 1000 teams from around the world will converge on Dorney Lake for the world championships from August 7-17.

Tipi Haere are one of three seeded teams for the Masters 60 men’s 500m and 1000m sprint events.