Masterton out to make history

There will be a new name engraved on the Duncan Cup when Masterton Golf Club and their rivals from Judgeford contest the final on Saturday, writes Chris Cogdale.

The Masterton Golf Club is on the brink of making history in Wellington interclub competition. The Lansdowne-based club will play Judgeford in the final of the Duncan Cup at Royal Wellington Golf Club near Upper Hutt on Saturday.

Masterton made the final of Wellington golf’s premier interclub trophy for the first time with an 8-7 victory over Judgeford in the preliminary final on May 4.

That was the second occasion this year that Masterton have toppled Judgeford, having also beaten them 8-7 in round-robin play.

Judgeford qualified for the final by winning their second-chance semifinal over Shandon 9-6 last Saturday.

“We have beaten them twice, but they scored half-a-point more than us and won the Otaki Cup [for the team with the most points after the round-robin], so we really wanted to play them in the final.”

Macklin said Masterton’s journey to the final was the result of a lot of hard work.

“It’s probably the strongest team we’ve ever had. Over the past three years, we’ve collectively got better and better. 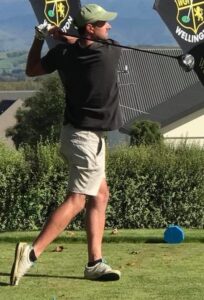 Sam Forrester … at No 2 for Masterton

“A lot of the guys have been among the best junior golfers in Wairarapa over the past 15 years or so, and it’s all coming together – we have a very talented group.”

The team is led by Kerry Mountcastle, one of New Zealand’s leading amateurs, and second-ranked Wellington amateur behind international team-mate Daniell Hillier.

Mountcastle was a member of the New Zealand team who were fourth at the 2018 Eisenhower Trophy. The 23-year old also won the 2018 New Zealand Strokeplay Championship, and then beat a field of professional golfers to win the Carrus Open in Tauranga.

“Having a New Zealand rep at number one has brought everyone else up – they’ve all had to lift their game.

“Sam Forrester at number two has been a stalwart for the past 10-12 years.

“Brent Mackenzie and Simon Dew were top juniors, Troy Shaw plays out of Mahunga but has always played Wellington interclub for us, Owen Lloyd has come back after a break and is playing really well, and Phillip and Jeff Tuoro were all members of the Miramar team who won the Duncan Cup in 2015, so they’re all really good players.”

Macklin rates the Judgeford line-up highly and said they were very similar to the Masterton club in developing a team over several years. 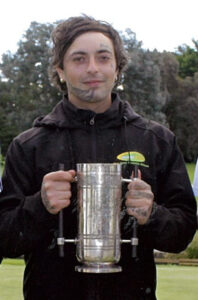 “They have Jayden Ford, who is a very good junior [ranked No 5 amateur in Wellington] and Adam Church, who is a stalwart of interclub.

“They also have a lot of good juniors. They won the Watt Cup, the top junior interclub, last weekend.”

The final will be decided on the match play format, with foursomes in the morning, followed by a round of singles in the afternoon.

Macklin said the foursomes, in which two players play alternate shots, was the key to success.

“It all comes down to the foursomes, so if you’re leading or if you’re close, it is most important and it sets you up really well for the singles.”

In their preliminary final clash with Judgeford, Masterton took a handy 3-2 lead, with wins to Mountcastle and Forrester, Jeff Tuoro and Lloyd, and Phillip and Toby Tuoro.

The singles were split 5-5, with Masterton wins going to Lloyd, Dew, and the three Tuoro brothers.

Victory in the final will be history-making for both clubs.

In the 73-year history of the Duncan Cup and Otaki Cup, the only success by either club was Judgeford lifting this year’s Otaki Cup.