Alpacas are social animals with a herd hierarchy. PHOTOS/GIANINA SCHWANECKE

Liz Barnes and Cheryl Hughson run alpaca tours from their 4.5-hectare property in the Rangitumau Valley, just outside of Masterton. 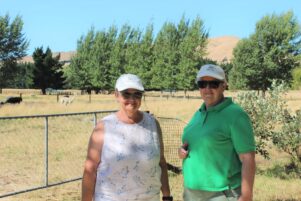 The two considered buying various animals and initially discounted buying the South American camel species because of how expensive they were.

“We ended up getting one of each which is important because they get lonely otherwise,”

Two quickly became three and by the time they got to 30 they realised they had outgrown their Greytown property and moved the operation further north.

At one point, they had about 90 alpacas but had downsized to their current herd of about 45 alpacas.

There’s less than 5 million across the whole world, the majority of which live in Peru.

Barnes said it was “just lucky” the species didn’t become extinct hundreds of years ago when Spanish conquistadors almost wiped them out to undermine the Inca economy.

“It was such a valuable commodity that they used alpaca wool as a currency.”

A small population survived high in the mountains and was later domesticated.

It’s only in recent years that the alpaca industry has taken off and it’s thanks to a Masterton man that alpacas were first introduced to New Zealand. 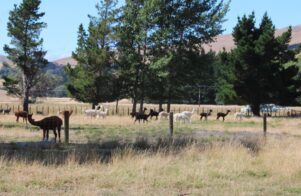 They come in a range of colours, though wool manufacturers prefer white for dying purposes.

In 1987, Ian Nelson pioneered the way for exportation of alpaca out of South America to become possible.

Today, the country has about 20,000 registered alpacas.

“It’s a growing industry all around the world,” Barnes said.

For one thing, it’s hypoallergenic.

Hughson said the market for alpaca fleece had changed dramatically since they first started.

“What alpacas are really here for is their fibre, and now we have a market.

“When we first started, everybody talked about the beautiful alpaca fleece, but we couldn’t sell it because we didn’t have enough.

“Manufacturers were looking for 200-150kg in one colour, but no one had the herd size for that.”

Alpacas can be shorn about once a year producing between 4-5kg of wool.

Part of the issue with growing the market was increasing international herd sizes as alpacas were slow breeders, Barnes said.

“There’s no mass production of alpaca fibre anywhere across the world.” 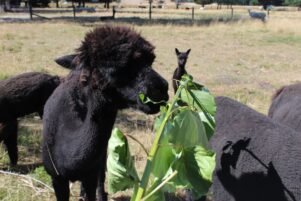 Feeding a mother in the maternity pen, while her one-week-old cria [baby alpaca] watches on.

It’s rare for alpacas to birth twins or triplets, she said.

Despite this, people are becoming more interested in alpacas.

About 10 years ago, the sisters opened their farm for tours, launching The Alpaca Place.

“We used to get people turning up here, and it was taking up a lot of time,” Barnes said.

“Eventually someone suggested we charge them for farm tours.”

The launch was supposed to coincide with New Zealand hosting the 2011 Rugby World Cup.

“We started the farm tours in 2011 in time for the Rugby World Cup, but nobody came.”

Now they get anywhere between 200 to 800 visitors each year, most from overseas or outside of the region.

For some, it’s a life-changing experience.

“We’ve had a woman here once who was 54 – she came from China – and her daughter told us how excited she was because her mother had never touched a living animal.

“She had lived in a city all her life and wasn’t allowed pets.”

Hughson said alpacas were more intelligent and much easier to care for than sheep.

“I like how easy they are to keep. They don’t get things like foot rot or flystrike.

“People who choose this lifestyle will find alpacas perfectly suited to their farmlets because they are extremely easy to care for by people without a farming background.”

The sisters were hoping to downsize their herd further and would be looking to sell many of their alpaca this month.

Prices range from anywhere between $1800 to $8000 depending on pedigree.