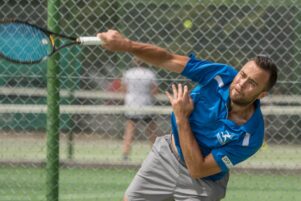 Masterton’s Boon Huxtable was too good at the top of the order, beating Opaki’s Chris Davidson (below) 6-1 6-4.

Masterton moved into second place with a clean sweep of an understrength Opaki in their Regional One Interclub clash at Masterton on Saturday.

As the scoreline would indicate, most of the Masterton players were untroubled in winning their matches, but there were some crucial wins in close games that denied Opaki vital points, which could prove decisive when determining final places.

The Masterton men were in convincing form, with all four winning their matches in straight sets.

Boon Huxtable won the battle of the number ones over Chris Davidson 6-1 6-4, Chad Parson beat Duncan Oakley 7-5 6-2, Rhys Hooper was too good for Jon McNab 6-2 6-4, while promising teenager Liam Kerr won the tightest of the men’s singles matches over Richie Day 6-4 7-6.

The absence of usual number one woman Gerry Brooking proved to be a big loss for Opaki and Masterton capitalised. In the doubles, Huxtable and Hooper dominated Davidson and Oakley for a 6-3 6-4 victory, Parson and Kerr came from a set down to beat McNab and Richie Day 6-7 7-6 7-5 in a thrilling match, and Malcolm and Foley beat Day and Young 6-2 7-6.

The 11 points for the clean sweep lifts Masterton to 20 points, six points behind leaders Martinborough at the halfway stage of the competition.

Opaki are third on 11 points, with Gladstone on nine points.

Martinborough and Masterton will meet in a mouth-watering clash of the top two teams on Saturday.

Meanwhile, Martinborough were made to work hard to retain their unbeaten run in the Wairarapa regional one interclub competition on Thursday.

Martinborough weren’t expected to be tested by Gladstone who had suffered two heavy losses in the first two rounds.

In the end though, it came down to the men’s doubles to decide the fixture. The inclusion of the classy Chichi Beck as number one woman for Gladstone closed up the tie.

The men were a different story with Martinborough dominating and their only loss coming in the singles.

Wilkie and Steve Chapman took out their doubles match with Lochie McNab and William Day 6-2 6-2.

It looked like an upset was on the cards when Blackwood and Scott Day took the first set against de Groot and Jones, but the experienced Martinborough pair recovered to win the next two sets 6-3 6-1, and close out a 5-4 victory.