A former national champion, and a Wairarapa College student in his first full rally are aiming high at Rally Bay of Plenty on Sunday.

Masterton’s Richard and Sara Mason will compete in their first rally in five years in the 20-year-old Subaru Impreza in which Richard won the first of his five national titles in 2005.

“When we got out of rallying a few years ago, we bought the car back after we sold off the other car,” he said.

“We’ve done quite a bit of work to it, and it’s probably quicker than it ever was.”

The Masons are seeded fifth for Rally Bay of Plenty and are confident of a good showing.

“We’ve done a few hill climbs and have been on the pace, and we would like to think we will be among the front-runners.” 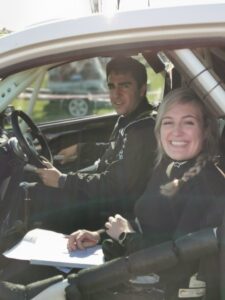 At the other end of the experience scale, Jackson Clendon will make his rally debut in his Ford Fiesta.

Clendon will have Katrina Renshaw from Palmerston North in the co-driver’s seat, and his father Peter Clendon said her experience would be valuable.

“She has sat with a lot of NZ championship drivers, and she’s got the experience that will let Jackson drive at 100 per cent,” he said.

“When you do a rally sprint you get to do the same road several times, whereas this rally there’s no reconnaissance so you buy the pace notes and you really have to concentrate and trust what your co-driver is calling to you, because you haven’t seen the road before.”

The rally based around Whakatane takes in 123km of gravel roads, some which were used in the NZ International Rally, including the demanding Manawahe Rd stage.

Four of the nine stages are completed twice, with only one of those, the final stage, run in the opposite direction.

Clendon said Jackson is a good chance of finishing in the top three in his class.

“There’s a lot of emphasis put on new entrants. There are special awards for novice drivers, and that’s a big part of the rally as well.”